I'm honestly doing quite a lot better mentally.  Pretty sure I spent a good two years being depressed on and off.  The depression cycle is strange, when you look at it.  Things seem to go well for a bit, and then it starts to creep up on you (the trick is catching when it's happening!)  Then you get the utter uselessness feeling, then the shit hits, then you are better.

Leading up to the "big move" for my business I was really in a daze.  And part of my therapy was figuring it out.  Now though, with some hindsight I'm quite happy about a few things (despite my boss bringing them up on occasion).  One of them is that I've really made my peace as far as no longer being a recording engineer, and all the shit that went along with it.  Recently a friend (former client) hooked me up with another possible recording session.  In the end the session isn't going to happen.  I'm actually quite thankful, as I found my anxiety starting to increase because of the possibility of it.  Which leads me to believe that I am officially over it.

and that's a good thing.

While I haven't been doing as many creative things in the evening, I am spending a bit more time working on myself.  I'm trying not to be hard on myself because I didn't:  Draw a map, write stuff, etc.  What has been giving me purpose is slowly working on ideas for my isle of dread campaign.  And honestly that's enough.

Eventually get my shit together and put some new toadstools stuff out.  As it stands  I've got about 10 projects that are slowly being written.  I've decided to attempt to complete a "first draft" on a project, before doing any kind of editing.  Basically writing diarrhea.

Grand scheme of things I am doing a lot better than I was.  I've been telling people instead of having a "Mid life crisis" I decided to have a "mid life depression".  (Honestly not as much fun as buying a corvette!). 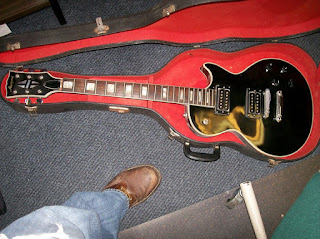 As a sorta side note, I'm going to start working on a guitar rebuild repair project.  I'm probably going to create a blog that will have updates to the process, pics etc.  So if you are interested, I'll toss the link up here when I finally get started.  I'm currently sourcing parts for the project.

Posted by shanepatrickward at 9:00 AM