B/X Essentials saved my ass from a wet basement 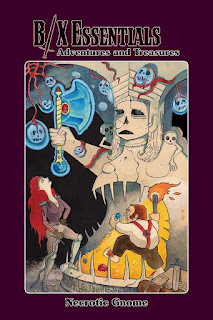 As many of you know B/X Essentials has been re-dubbed Old School Essentials.  Which was funded successfully thru kickstarter.  From what I gather there were a few changes within the rules and a name change.  You can read the author's notes here.  (Actually it's a very interesting and good read if you have the time).

What has remained is the original B/X Essentials in RTF format.  And here's the part where I get into why its saving my ass.

First off, I've got a pile of clones and copies of D&D.  Far too many.  My current flavour is Charlie's Whitebox which I quite love.  (I'm DMing it in a Isle of Dread Campaign at home).  That being said I'm playing in a game with Tim and he's using B/X (specifically the Old School Essentials version I believe).  Reading thru the rtf's and the author's notes, I'm falling in love with this game!

Having recently got my office all setup in the basement I moved down a few D&D books to have handy when playing.  More often than not while playing old school games there is not a lot of need to pick up a rule book, but on occasion (like leveling) its handy to have a round.

I found out last night that the water pipe leading outside for the hose leaks behind the wall.  After weeks of running a de humifider in the basement, the room was fairly dry.  I felt like I could leave a few prized possessions on my desk for handy reference.  After my wife watered the garden I went downstairs to move the laundry load over and realized the floor was wet.  ACHK! Cue mild panic.  Bring up B/X Reprint and put back on shelf.  Then start dloading all the RTFs.

What I'll probably do is create a basic document within google drive for handy reference.  Mostly just the core rules (equipment, classes and that's it basically).  Just for a quick reference.  I've switched over from using a paper character sheet to a google drive doc.  As well all my notes are on the drive.

If you'd like to see them they are here and here.

Anyways, I gotta say thank you very much Necrotic Gnome for saving my ass!

Posted by shanepatrickward at 7:04 AM