The epic weirdness of Cha'alt 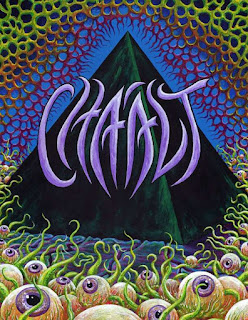 I kindly received a copy of Cha'alt from Venger.  You can grab a copy here.

This is a BIG book.  It comes in at 218 pages!  I'm always amazed at his work ethic, inspiration just flows thru him.

Cha'alt is the beast of a book (218 pages) I've been working on for the past year.  It's a ruined world focusing on a couple of introductory dungeons before getting to the main event - the megadungeon known as The Black Pyramid.

Cha'alt is compatible with both old school and 5e D&D purposefully blended for maximum usability.  Full disclosure: aside from advantage/disadvantage and bounded accuracy, there isn't much in the way of 5th edition mechanics. It's predominantly OSR.

Venger has included his own rules Crimson Dragon Slayer D20 within the book.  As well there is a pdf for Pregens and old school feats / skill-sets and background details.

Knocking the layout out of the park is Mr. Glynn Seal From Monkeyblood Design (whose done a pile of work for Venger, and he's won an Ennie for his setting The Midderlands!)   Damn I love the map on page 65.

This book as the description states is a setting book/megadungeon.  There's a nice over view of the world, all of the strange factions, a cantina that's in the middle of a desert (filled with patrons).

Venger loves to include random tables into his books, there's a pile of them! Including a handy chart for ability scores, typical +/- found in different iterations of D&D.  I probably should have noted this earlier, this is a OSR/D&D book.  You could technically run it with other systems (most OSR stuff is pretty easy to convert).  Alternatively you could pull a pile of inspiration from this book, and run with your own version of the Black Pyramid and Cha'alt.

There are six awesome factions detailed in the book.  A crap ton of new monsters for your players to contend with.

Example:  A ga'athrul is what we on Earth would describe as an alien dinosaur. They are massive creatures living in the wasteland, vying for territory and resources…such as delicious humanoids.

An incredibly detailed city, with lots of random tables! KBrae’andeuamthek City of the Purple Demon-Worm. (About the only thing that I`d really give Venger a dig at, is the names of things in his books.  I can`t pronounce em! That of course is not Venger`s fault.  And Honestly KBrae’andeuamthek sounds a lot cooler than Waddingtonsforth... or something).

Excerpt from the city details: Periodically, the Purple Demon-Worm priesthood imbibes hallucinogenic drugs. So,all but the High Priests and Ipsissumus are easily distracted and/or misled by a clever ruse.

The Black Pyramid:  There's so much going on within this pyramid! Each room is almost a vignette unto itself.  There's weirdness, there's fruit! there's death around pretty much every corner.  This place begs to be explored.

I really dig the map style.  It`s these oddly triangular rooms with passages between them.

Here`s a few excerpts from the dungeon.

Videodrome:  Black robed humanoids are abusing and humiliating each other as cameras record the
degradation. The leader has black crosses drawn all over his face, neck, and hands.  There are certain individuals within the Sect of Kara'as who've been exiled to this room for worshiping Ara'ak-Zul. They call themselves The Order of The Black Trapezoid. This is where they live.

Chartreuse Sphere
The yellow-green line of illumination running along the top of this room perfectly matches the color of the glowing sphere that hovers in the center of this small room.

All told there`s a 111 rooms in this creepy assed pyramid!

This book will bring you years of craziness and gaming.

The book was printed at Friesens (which is super cool, as it's really close to my actual home, and they do really good work!).

Quoting Prince Of Nothing in the afterword:

Running Cha'alt is not about control, accuracy, or preparation. It’s not a series of
encounters that requires a delicate balance of character classes, feats, and consumables to
circumnavigate successfully.

If you only ever buy one book of Venger's, buy this one!  - Shane

(Note: it's a great idea to buy the others as well, there's some amazing wonderfully covered pages of purple slime, with strange androids and gonzo weirdness within Venger's catalog).


Posted by shanepatrickward at 6:18 PM