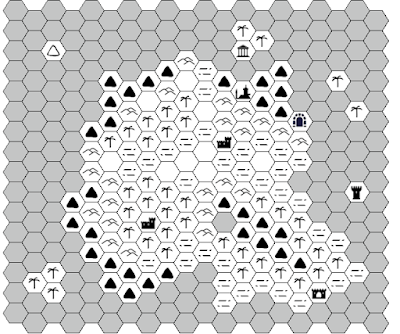 I suggested the idea on mewe about trying to create a mini setting using only 10 monsters.  This came from having an incredibly difficult time trying to fall asleep last night.  I’ve had a copy of the 2nd edition Monstrous Manual for years, and there are some many great monsters that I haven’t ever used.  It’s kinda sad isn’t it.

After I suggested this Chris Hall came up with this handy list:
Pick a semi-intelligent humanoid (could be goblins, apemen, subhumans, etc.). Pick an undead. Pick an ancient fey race. Pick a giant/ogre/troll race. Pick a type of great wyrm or lizard. Pick something aerial. Pick something to lurk in the water. Pick something from another dimension (demon, gith, illithid). Pick a classic creature from mythology (medusa, satyr, minotaur, etc.). Pick some foul crawly thing that infests the underworld. Something like that. Then I’d give each a twist.

If you go ahead and do this, use this hashtag #tenmonstersetting

NOTE:  Almost all of these monsters are copywright Wizards of the coast.  This is just some fan made coolness, and is only intended as that.

So without further ado, here’s the monster list, and mini setting.

Semi Intelligent:  I decided to pick two races that are at odds with each other for territory along the swamp coasts.  The Yuan-ti & the Mold Men (Vegepygmy).

Undead:  Revenant’s (vengeful spirits that have risen from the grave to destroy their killers).  Years ago a army of invaders was decimated by the Rakshasa.  Since then the army has risen from their shallow graves in search of their hated Enemy.

Ancient Fey: Rakshasa (malevolent spirits encased in flesh that hunt and torment humanity), while no one knows exactly where the Rakshasa came from, they have made their home within the swamps in a great crystal pyramid.  Having defeated an army of humans who rose up against them, they now dwell in peace, lording over the creatures of the swamp (or so they think).

Giant/Ogre/troll race: Reef Giant (There is only one, Igor), lives along the coasts of the swamps.  He has  made his home here for many years, and is fairly peaceful.  It is said that Igor has a great ancient weapon below the sea, hidden in his mansion.  This weapon, in the wrong hands could destroy the world.

Great Wyrm/Lizard:   Mist dragon (one), Xavier.  Xavier spends most of his time thinking, and is completely uncooperative and very annoyed if disturbed.

Aerial: A pack of wild angry Griffons lives along the swamps & in the mountains.  Typically Griffons can be friendly creatures, but these have been twisted by some great evil.  Instead of looking like a half lion/half eagle, they resemble that of a half dog/half vulture.

Lurking In The Water: Kuo-Toa, who raid along the shores killing both Mold Men & Yuan-ti.

Another Dimension: Githyanki have come here looking for the Rahshasa, specifically looking for their leader Abdul Paranshah, who killed the Githyanki Queen.  Thus far their attempts to infiltrate the crystal pyramid have failed.  They made an alliance with the Yuan-ti, it was however broken when a Githyanki ate an unfornate Yaun-ti that had cheated at a dice game.

Classic: Gorgons (monstrous black bull, thick metal scales).  The Gorgons were apparently set free from the Underworld by the Grell.  The Grell had made a deal with an Elder God.  In return for their safety from the Gorgons, the Grell were supposed to send any humanoids venturing into the underworld to the Abyss.  Because of this, the Grell send out numerous scouts looking for anything that moves, to keep their safety from the herd of Gorgons.   The Gorgon stampede can be heard for miles, they leave a path of destruction in their wake.  They cannot be reasoned with.

Underworld:  Living underground are Otyugh’s and communities of Grell.  The Otyugh’s feed on all of the awful left over from the Grell, in a sense they are trash compactors.  Generally they are placed down deep pits near the entrances of Grell communities.

map courtesy of https://wizardawn.and-mag.com
big thanks to the people have worked on the Forgotten Realms wiki!
https://forgottenrealms.fandom.com

Posted by shanepatrickward at 9:28 PM