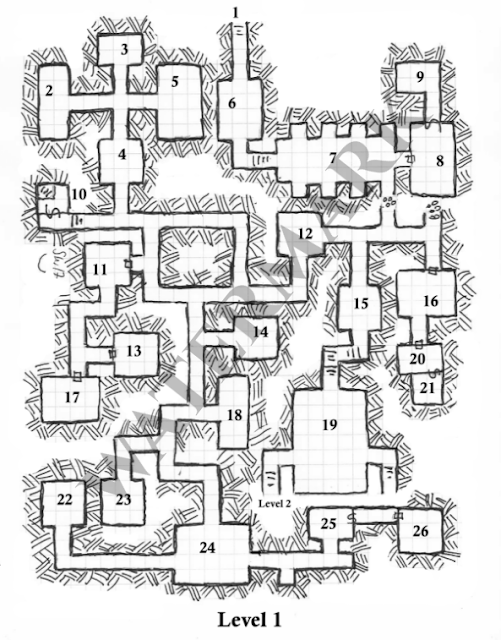 (Room 1)  In the undercroft of the old temple is a set of stone steps leading to the crypts.  Small braziers line the corridors leading down, they have not been light and show signs of age.  The corridor is filled with dust and spider webs.  You can make out the sound of metal on stone coming from the east.

(Room 5) The layers of dust on the floor have probably been here for centuries. The large room contains a stone coffin, the lid lying against it. There are a few bookshelves filled with musty tomes, a small open chest with coins spilling out, and two large barrels. On a small table is a book laying open, a quill and ink sit beside it.
This is the room of a dwarven vampyre named “Gaziel”. There is a 1 in 3 chance that the Vampyre is in this room. If he is not then he is wandering the dungeon. He was turned years ago, and has only recently woken up from a deep thirty year sleep. He is unaware of the recent changes that have happened in the underworld. He will not outright attack the players, as he’s recently fed on the goblin’s inhabiting the dungeon. When he was turned he fled the small dwarven city and lived in seclusion, feeding on whatever monsters lurked into his tomb.

The book on the table is the diary of Gaziel and details a lot of his undead life. Most of it seems to be ramblings of a madman, with small tidbits of truth.

If the bookshelves are searched, a few interesting tomes will be found:

Death & It’s effect on life - contains 2 - 1st level healing spells, which can be ripped out and used as scrolls (Cure light wounds, Bless). Worth 50 GPs.

The Unusual guide to the world below - A tome detailing some of the unfortunate monsters that inhabit the underworld. Worth 30 SPs.

Magical Properties of fungus - A interesting read regarding the use of fungus and it’s healing properties. - 15 SPs.

The barrels in the room contain a rotting fungus mixture that smells unbelievably horrible. Eating any of this will inflict 1d6 damage, save vs poison.

The treasure chest is a trap. At the bottom of the chest is a metallic machine hand, that will grab any arm that gropes around inside looking for coins. The arm makes an attack roll against the players armour class, on a successful hit it attaches itself to the players arm. It does one point of damage per round as it holds on. The only way to get the arm to let go is to find the secret button hidden on the side of the chest, a successful find and remove traps roll will locate the button. Alternatively the arm can get cut off. The coins are all fake and worthless.

(Room 6)  Along the east wall are two large wooden tables, on them are tools for preparing the dead.  In the west wall are wooden coffins in the walls, eight in total.

(The coffins are for the past servants who held a place of honour in the courts of king's.  Their coffins contain only their most prized earthly possession, trinkets and odds and ends.  No gold or silver).

(Room 7)  There are eight alcoves in this room, each of them held a coffin at one point in time.  All of the coffins have been tipped over, the skeletons of the dead are strewn across the floor.  There is a large brass door to the east.  A pile of rubble is directly in south of the door, where a coffin once sat.  Six green skinned short humanoids are attempting to get the door open with pickaxes.  The floor glitters.


(There are 6 goblins in this room.  The room contains 300 gps strewn about the room, this treasure was cursed by a priest when the dead were buried.  If the players try to touch it or take it have them save vs spell or take 1d6 damage.  If successful the players can keep the gold but no one in the general vicinity will take it as payment.  The goblins have been paid handsomely to collect the corpse of the heretic king.  Each goblin has 30 GPs on their person).

(Room 8)  Inside this room is a large brass coffin, ornately decorated.  Written upon the face of the coffin is “Our hero, Brother to the Heretic King”.  The ceiling of the room is lit by a large metallic screen, it gives off a magical presence.  In the four corners of the room are the following wax fruits in brass bowls:  2 Apples, 2 Oranges, 2 Bananas.

There are four equations written on the coffin, one on each side.

Each equation is a button, and when pressed they will open small compartments in the coffin.  If three of the buttons are pressed the fourth one will not work.  The button labelled “9/5” will open the secret door to room 9.


(Room 11)  The door to this room is ajar, the hinges barely holding on.  Peering inside you can see three green skinned bodies lying on the floor.  A makeshift table made of refuse leans against one wall.

If the goblins are examined, they are bodies are not disfigured from a fight.  However they have small puncture holes on their necks.  If a search for treasure is made, under a small flagstone is a bag of 30 CPs and 10 SPs.  The goblins do not have any decent weapons or armour.  Scrawled in goblin on one of the walls is the following:


Meet near the dwarves, infiltrate and take the gold.

(Room 19) Magical light shines down from the ceiling revealing a horrific sight. More than a hundred dwarves are frozen in place in various acts of battle. Their skin encased in stone.  At the far end of the room is a large golden throne that stands higher than the rest of the room.  On it sits a dwarf frozen in time, his mouth hanging open yelling something, fist held high.  What is the most curious is the lack of enemies in the room.  To the east and west of the throne are corridors leading away from this awful site. There are not a lot of clues to how the dwarves have become paralyzed.  The throne contains 10 jewels inset into the arms, each jewel is worth 30 GPs and will take one round to remove with a dagger. Most of the weapons of the dwarves are still within their grasp, however there is one battle axe laying on the ground (Silver +2) and one dagger (Silver +1 against the undead) and a shield. A chest beside the throne is trapped with a poison dart (1d12 damage save vs ray/poison or die). Inside the chest is 500 GPs, 2000 SPs, and a makeshift map to level 2.

(Room 13) The old wooden door to this room is locked.  From outside you can hear grunting and yelling in a strange guttural language.  (inside) Inside the lightless room is a large humanoid with tusks growing from its face, it waves a battle axe at five smaller scared creatures.

The Orc is part of a larger group trying to infiltrate the ruins found in area 19.  He is attempting to intimidate the five goblins in this room, into helping the group of orcs.  The Goblins are extremely scared of the “ghosts” that haunt the halls, and are aware of what happened in room 11.  Buried under a rug made of animal hide is 30 CPs.


(Room 15)  The walls of this room are lined with wonderfully painted murals.  Upon closer inspection they appear to explain the history of a dwarven city.  At the southern end is a set of stairs leading down.  A light shines dimly from beyond the stairs.  The floor is covered with marble & alabaster stones.  Frozen in place are two dwarves standing at attention, their spears pointed towards unknown intruders.

There is nothing in this room of value.  If the characters look at the murals, they can discern that a dwarven city is very close, within a few feet.  It has a storied and exciting past.


(Room 20)  This room contains a makeshift study, there are a two book shelves and a large table in the centre of the room.  Three figures stand over the table in the torchlight pearing at a musty map.

(Room 21).  This room is quite small and dusty, cobwebs hang from the ceiling.  A very ugly carpet lies on the floor, chewed up from bugs.  In the corner of the room is a small stool with a few scrolls of paper and a glinting small silver object.

This secret room can only be opened by a key.  The mage in room 20 has it.  In order to open the door one must use the key.  On the book shelf under a book is a key hole.  If the key is turned to the left it disengages the trap, if it's turned to the right the trap remains active.  If the trap is activated and someone steps into the room, they will fall ten feet thru the false floor that is located under the moldy carpet.  1d6 damage, save vs spell for half.


The two scrolls are “scrolls of remove paralysis”, the glinting object is a silver token with a bearded dwarf engraved upon it.  If the coin is flipped all of the PCs will travel back in time one day.  The coin will then disappear and reappear somewhere in the dungeon.