Dan D came up with this idea (well this years version, I believe Beloche started it last year).  Essentially I think its a way to get back into writing, whatever path that takes.  As you can see by the image "got multiple projects? work on them".  So simply put, try daily to write something.  Now if one needs some structure, they could take the 30 days of August (err 31) and basically run down this list 3 times plus one.  I'm sure it's entirely up to you if you want to post this on your blog daily, or perhaps record anchor episodes for it.

I doubt that my A.D.D. would allow me to spend a month on each thing.  Possibly? but likely not.  I think I will do this creative thing, rather than do the whole #rpgaday thing (which I normally do in one blast).

I have so many god darn things half written, this should allow me a chance to focus on at least one of them, or possibly switch between them all.

I should note however, that the 3 Toadstools will be shut down for 2 weeks while I am away on vacation.  I'll be out in the bush camping, with no access to wifi (and I won't be bringing a device anyways).  I am however bringing a large notebook, a bunch of hex and graph paper.  I intend to write something! Don't worry about me I'm fine, I'll just not be around.

My list of unfinished projects are as follows:
Mutant Future Campaign Set in Canada.
Somewhere in space
A otherworldly hexcrawl
A small hexcrawl with slaves, a lizard king and intrigue. (kinda S&S)
A wuxia campaign for my old school players

I obviously have a ton of shit that I've started and not completed. 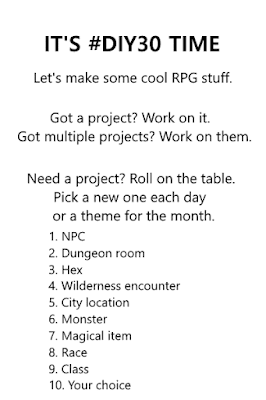