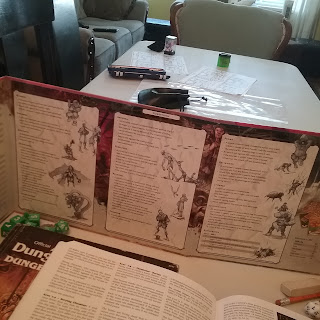 So last night our old school group got together for a game,  We hadn't played in a LONG time.  I myself haven't GMd in over a year.  It was a bit of a fiasco.

When I originally posted about playing I had mentioned that I needed to do some prep to run the funnel.  A few of my buddies were pretty cool about "Nah you'll do fine don't worry too much".

I made a pile of Bad gming mistakes.

I still don't quite understand the saves and how they are reflected so I made it up.
I used the "read aloud text", which I'll never be doing again.  As soon as you read it, everyone looses interest.  The problem was, I was rusty, and honest I thought the writing in the adventure was very evocative.

I didn't railroad anyone however.

Everyone did have a lot of fun though! Kurt's girlfriend showed up and drew the whole time we were playing, posted below are some of her pics with descriptions.

The adventure we played was the free rules for DCC rpg from free rpg day.  There's a section in the adventure where there's this big barbarian statue and it blasts hot flames at the party when they try and leave the room.

(Pictured below is Mike Wazowski as a barbarian statue). 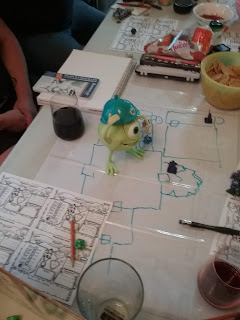 I'm not sure if I read it wrong, or if I just ran it correctly.  It made sense that it would blast players trying to leave the door they came thru, but all the rest of the doors? not sure.

All of the players were allowed to have individual attack rolls.  Any checks were done with their first player in the marching order.  Which went up down, left to right on the 4 page sheets I gave them.

However with the monsters, well in the case of the barbarian statue I just rolled once to hit and once for damage.  The case in point was Josh's characters were leaving, and the barbarian shot the flame at them.  There were four characters and one blast.  It didn't make sense in my head at the time to roll 4 times for the monster's one shot.  And in the book it just said it does one attack.  However there were 4 PCs leaving the room.  Maybe I should have ran it as "monster attacks one player".  In the way I did it, I killed him off in the first room, I did allow him a save, but he failed.  The way I looked at it is

" the monster turns and blasts a stream of fire at four PCs trying to leave,  the players fail a reflex save and take damage, it's one blast headed at all of them.  Not four blasts".

Whatever the case I cocked it up.

About a month ago I had re-read the DCC rules and the adventure and I felt like I had a firm grasp of it.  Honestly I think I'm just getting older.  Give me rules light basic DND and I'm good to go.  Even the adventure, while written very well I still felt like my hands were tied a little bit.  I've talked about this before.

I must say everyone enjoyed DCC character creation, they really understood the made up way of doing zocci dice.  (using control dice).

The system and the free rules are great, I could see playing a ton of adventures with it.
The adventures contained within the book are wonderfully written.
If you are into old school, and understand 3rd ed mechanics and gonzo awesome, DCC is a wonderful system.

I haven't decided if we will run the next adventure in the book or not.

After we were done, I had the players roll up whitebox characters for the next game.  I am on the fence as to wether to write a hexcrawl my own world or run Isle of dread.  I do have a good idea for a starting point.  As usual we used my "plausible backgrounds table", which is always good for a laugh.


I'm rambling... Here's the pics that Amanda drew.  So awesome.


At one point someone attempted to slide under the statue and get to a door.  They rolled a 1, so I made up that they cracked their head on the balls of the monster. 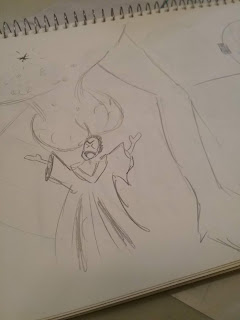 My wife decided to keep these weird ceremonial bone masks and put them on her characters. 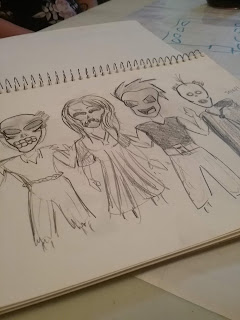 The ceiling and been broken so one player decided to jump on this weird alien crystal ball and jump down with it.  One of the other players had a large piece of fabric as trade goods.  This was the result. 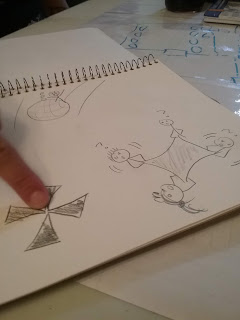