Due to the fact that it's FRIGGIN FREEZIN at the 3 Toadstools Tavern & Grill, we decided to repost this Ice Witch. 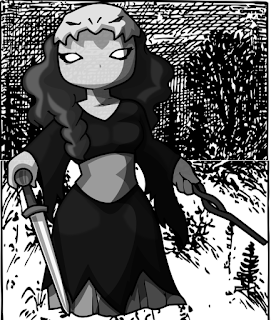 Ice witches are young women from the North that have taken a vow to the Evil gods, in return for their power they must sacrifice men to appease their Gods.  Ice witches are quite beautiful, with young supple skin, charismatic features.  They normally have white hair, and intensely blue eyes.  Any man in the general vicinity of an Ice Witch must save vs spell, or be charmed for 1d4 rounds by their presence.  Ice Witches have been granted the power of an Icy Blast, which they can cast at will throughout the day.  Heroes can attempt a saving throw vs spell to half the damage of the Icy Blast (Roll 2d4 damage then divide in half).  Ice Witches have access to levels 1 – 3 of Magic User spells and can cast as a sixth level magic user. (2-1st level spells, 2-2nd level spells, 2-3rd level spells per day).
Posted by shanepatrickward at 8:59 AM