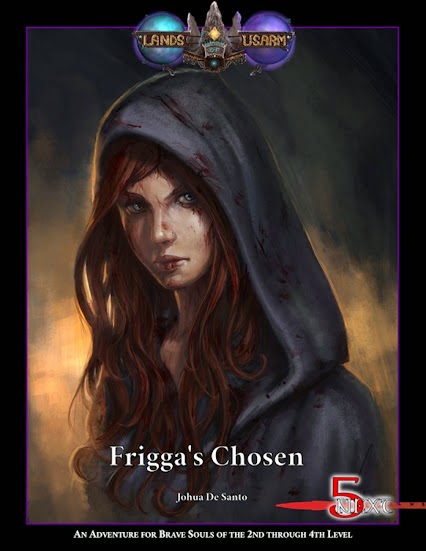 I managed to get my grimey hands on a copy of this just before it was released.  Frigga's Chosen is a 5 Next Adventure module written for "Brave Souls Of The Second Thru Fourth Level".  I love that sound of that.  This adventure was written by Johua De Santo.  Johua also did all the cartography and layout.  Edited by Tim Snider.

First things first, and I hate to "judge a book by its cover", but WOW do I love the cover art on this!  The cover art is by Javier Charro.  The interior art is provided by Javier Charro, Mark MacAusland and Dave Peterson, Pawel Dobosz, Richard Spade.  The module clocks in at 23 pages, including the sexy cover.

A quick point, You will need copies of D&D 5th edition to play this adventure, at the very least the basic rules.
As noted in the text:

First things first, the layout of this is amazing!  It has the new fifth edition feel to it.  Everything is easily readable, the maps are fantastic!  (However I'd like to draw one for Johua at some point... dig dig).

There are 3 detailed maps, with 24 encounter locations.

My one and only critique is that I really need to get a campaign setting for Usarm,  Even having a map of the "Lands Of Usarm" in every module would be handy.  "This adventure takes place there, alright".

Please see below for the product description, if you are a fan of other previous Lands Of Usarm adventures, you are totally going to dig this!  I've read thru the pdf a few times, but rather than spoil it with any actual spoilers, I suggest read below.

There is a healthy background informational section within the adventure, including a Prologue, and a good concluding the adventure section as well.

Deep in the Apegia mountains, long forgotten to mortals, is a small building that leads into the heart of the mountain range. Once a Clan of goblins called this place home, but have now been slaughtered and raised as Charion servants to the cult of Orus. The Cult searches for an artifact of the Usarm that will aid them in the release of Orus and provide him with a sacrifice that will empower him and sate his Unmortal masters.
Legends say this artifact the Cult frantically searches for rests in the Apegia mountains waiting for its black heart. Where this heart is no one knows, but if found the relic has the potential to destroy everything from the City of Newrk on the coasts to Icago in the west. Hundreds of miles of death and destruction.
Frigga has summoned her last surviving Chosen; a woman who has turned away from her faith, to stop the cult from finding this object.
Unfortunately for them a small band of adventurers has been swept up into this battle of life, death, and godly politics.

You can grab Frigga's Chose on RPGNOW for $5

Other "Lands Of Usarm" Titles

Assault on the Southern Horn

In the swamp lands of southern Usarm a horn, glowing and bright has erupted from
the fetid earth. The town of Backbend has become lost within the swamps it once
boarded and its people have vanished. Tyor, Sage of the Mage Academy in Coralius,
and his young apprentice Cami have been sent to investigate and discover the nature
of the swamp’s encroachment and that of the glowing Southern Horn.
What Tyor finds is a town overrun with Dark Elves and strange beings. Cami is taken
in the night and Tyor desperate and alone sends a plea over psychic webs. Come to
Backbend, breach the horn and discover its secrets and the plans of the Dark Elves
… and most of all save the apprentice he regards as a daughter!
“Assault on the Southern Horn” is a new 5e/Next adventure for 4 to 6 characters of the 4th through 6th level and suitable for one to two nights of play. "Assault on the Southern Horn" featuring new monsters, magic items and a new Elvish sub-race and background!

South of the Mage Academy of Coralius lay the Horn. An object of ancient mystical might. While always studied by the mages this Horn was nothing but a mere curiosity … until now. Months ago children started to vanish from their rooms. At first just mundanes, the children of the small village that supported the Academy, but now the apprentices from the academy have begun to disappear as well.
No one would suspect the Horn, many children have been known to run-away to a life of grand adventure. However, with the disappearance has come a change in the Horn. It has begun to glow in the night and a strange and hypnotic humming can be hear emitting from it … what link is there between the Horn and the missing children?
Under the Horn is the first part of the “Horn Saga” for the Lands of Usarm world created by Genius Loci games and is suitable for brave souls of the 1st through 3rd level. If there is enough desire the rest of the “Horn Saga” will be converted to Pathfinder.

To the north the mysterious Orc tribes threaten the coastal town of Icago. Already the Abbey of the Goddess Thiseir has fallen due to their raids and farmers and fishermen have reported seen the horrid pig-faced creatures moving inland.

The Cloaked Mage promised the Lord Mayor a way to be rid of the threat … no one has heard from the mayor or his family for a week. Every search attempt is a failure, the Lord Mayor's farms are protected by strange metal constructs known as Scarecrows. Strange lights streak the night sky, toward the Scarred Relic Moon … from the Lord Mayor's home.
A call goes out to anyone brave or stupid enough to aid the town; you have answered.
“Spectres of Usarm” is the Fourth Two-Page -Adventure from Genius Loci Games and the third to use the Swords & Wizardry rule set. Created for a party of 4 to 6 players of the 4th to 6th level, the “Spectres if Usarm” mixes exploration, story and combat as quickly and efficiently as possible to provide at least 2 hours of fun.
Enjoy! NOTE:  I played in a play by post version of this and it was a lot of fun!


Posted by shanepatrickward at 2:43 PM