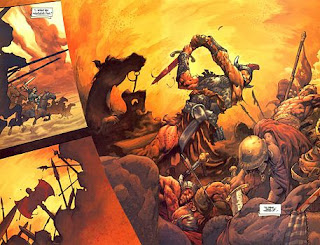 I swear I get most of my thinking done while walking to work in the morning.  Problem is its always something new, and not always things that I should be working on.

in combination with all the awesome tables that +Eric Fabiaschi keeps posting over at http://swordsandstitchery.blogspot.ca/

So much so that I've probably rolled up about 6 or more adventure ideas from it.  Filling in the story line after you do the initial rolls is quite easy.  To put something like this out in a module format however, it would be very railroadey.  Atleast as far as the story goes.  Think TSR modules from the 90's basically.  (Sword Of The Dales, etc).  That said it could be a LOT of fun to put out a bunch of adventures together, that had a overall plot line.  Maybe something similar to +Tim Shorts "Starter Adventures"  http://gothridgemanorgames.blogspot.ca/2014/12/starter-adventures.html
(Note Starter Adventures is not railroadey, what I mean is a nice compilation).

As far as rules, I've been wanting to dip my toes in the mini6 rules, so this might be a cool idea for that.  As well from what I gather "Barbarians of Lemuria" is similar in concept to mini6.

2.  I've been working on the next adventure after the 5e starter set.  Tying up the character backgrounds is going to be interesting.  Partially because I've already sort of fallen in love with these characters and I want to see what is going to happen.

Here's the run down of the backgrounds.

Vespers - A  Tiefling Paladin, who basically ran away from Candlekeep after a very large fire that claimed a lot of people close to him.  he blames himself for the not helping enough during the troubled time.  He follows lathander, and basically beats himself up on a regular basis (emotionally that is).

Varis - Varis is a warlock, who has made a deal with a Maralith, in front of the rest of the PCs! Including the very good aligned Vespers.

Jen's Character - A wizard, who's mentor died before he found an ancient red dragon, he wanted to treat with.  Her quest is for knowledge, specifically to find this dragon.

Kurts Character - a common human thief, however his parents were murdered, the murder stole one of the 2 dice that his father used to use for gambling.  The dice were very specific, a home made set, none other in the world like it.

Now as you can see there's some tension already.  Varis has been tasked by the Maralith to find 4 pieces of stone that go together in a tablet, what they are for she has not said.  Vespers countiues to do what's right, including making sure a kid got home safe after showing the entrance to the red brands hideout.

What I've been working on is tying all of this together, so there's these little threads that weave in and out of all the storylines.  As people have said "D&D 5th edition is their second favorite edition", and it really is mine as well.  There's a special place in my heart for OSR, and specifically BlueHolme & Basic Fantasy, but I can't help but love the backgrounds and how this all makes my brain work in over drive.

Obviously I'm not going to go into much more detail than this, as some of my players read this blog.

Posted by shanepatrickward at 12:37 PM