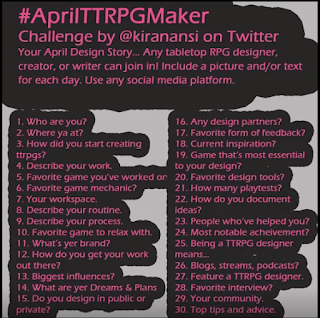 Not that anyone really cares, but here's the first half of the April TTRPGmaker for me.  First off, I'm not really a RPG maker, I create adventures for the most part.  Although I've released a few half baked rules hacks.

1.  Who are you?
Shane Ward, sometimes I go by the nickname "Gilligan" or "Shaner".  But don't call me that.

2.  Where ya at?
The great white north kids! Specifically the city of Winnipeg, which is currently in a "white out" situation.  ie the Jets are in the playoffs.  The city is nuts.

3.  How did you start creating ttrpgs?
I honestly fell into it I think.  I started this blog in 2013 (holy shit!).  Shortly after that I wrote "caverns of ugard" and it sort of spiraled from there.  I normally put out one to two adventures a year and they are almost all PWYW.

4.  Describe your work?
In my adventure writing I try for a "swords & sorcery" feel, but I think it comes off more as low magic vanilla fantasy.

5.  Favorite game you've worked on?
I'm guessing this is based on a set of rules I've written, which I really haven't.  I really like writing for Blueholme as a game.  Favourite thing I came up with is probably "Invitation from the blue baron" collaborative dungeon project.

6.  Favourite game mechanic?
I'm a big fan of old school reaction and morale checks, I really should have used them more when I was a kid.  Makes the game a little less hack and slash sometimes.

7.  Your workspace?
While I attempt to write at home on the couch with my laptop, nine times out of ten I get all my writing done at lunch at work.  Pretty much everything I do starts in google docs and then eventually get's ported to word or publisher.

8.  Describe your routine?
I get an idea, usually when I'm feeling a bit manic and creative.  Write as much as possible on that, then totally forget about it when the next ADD moment crops up, and rinse and repeat.  Eventually things come out, but I don't really schedule myself at all, it just sort of happens in time. I currently have about 5 projects on the go in various states of completion (one of which I haven't even started, but I think about on a regular basis).

9.  Describe your process?
As above.  ADD kicks in, usually on my walk to work (that's where I get all my ideas from).  I get a coffee and sit down and write the ideas while they are fresh (when I should be working.... like now).

10.  Favourite game to relax with?
I can run b/x or blueholme all day.  Relaxing wise it's totally mexican train.  Put on an album, grab a beer and play for 4 hours.

11.  What's yer brand?
3 Toadstools publishing, which is a stupid name.  It's basically a tavern name in a hobbit village somewhere.  That was the name that I came up with for the blog, and then later used for the publishing end of things.  (cuz cross branding I guess?).  I think my stuff is sort of in the "old school" aesthetic as far as looking like a revamped TSR product and a bit of DIY RPG thrown in for good measure.  Reading other designers stuff gives me good ideas to incorporate.  So I'm learning.

12.  How do you get your work out there?
Mostly google plus, posting in some communities.  Just talking with people.  I don't push as hard as I could.  At some point if I get something super exciting maybe I'll pour the coals on.  I do have a facebook page for the publishing company as well.  Once in a blue moon I'll email my customers thru drivethrurpg.com