IntroductionHalfway between here and there is a small roadside Inn. A weather worn wooden sign stands outside of the door “Adventurers wanted, apply within”. Weary from the road, you stand outside the Inn, smoke rises from the chimney promising a warm evening. The inside of the Inn is small and cozy, a set of stairs lead up to much needed beds. The small bar is decorated with old suits of rusted armour, a bookshelf with musty tomes and a large map of the countryside. The bar is empty save for a small gnome who is fast asleep at a table, smoke curls from his pipe.


The Return Of The Blue Baron 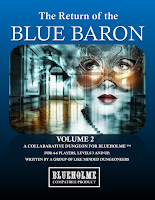 It is with heavy heart that I confirm the rumors which you must have heard by now.  My husband, Lord Gavanov Keiner, 23rd Baron Keiner, known to many as the Blue Baron, is no more.

Yet hope remains in the words of his final command, a rather unique funeral arrangement.  The Blue Baron dares all brave and adventurous souls who would risk death in trade for fame and glory to come forthwith to Einhornstadt, arriving no later than three days before moonrise.
My Lord Baron calls on you from beyond the grave. Ignore him at your loss and peril.
Expectantly,
Maria Keiner

You can get a POD here.
And the FREE pdf here.


An Invitation From The Blue Baron 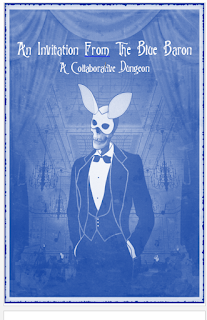 This wonderful forty four page adventure that you hold in your hands was written for Blueholme Prentice rules ™.  The book was a collaborative effort between some of the brightest minds in the Old School Role Playing community.  Detailed within this book is a twenty two room dungeon, new monsters & spells, and all kinds of interesting twists.  The Blue Baron holds his masquerade party annually, and because of this we have added a pile of random tables, which should easily allow replaying this adventure with different results! Grab a few sets of dice, some pencils, paper and few friends and delve into the masquerade.

A bit of disturbing news has crossed my desk.  It seems that a plot may in fact be a foot.  While I would like to detail all of the information within this letter, I would prefer to speak with you in person.  A fortnight from today, please meet me on the stairs leading to the dungeons of the Blue Baron.  I hazard to guess that you haven’t been living under a rock, and know full well that every year the Blue Baron throws a rather distinct masquerade ball.  Obviously you will be compensated for your efforts.  Consider yourselves cordially invited. 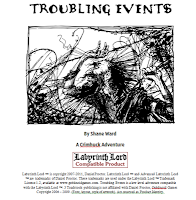 Troubling Events is the first adventure set in the world of Crimhuck.  It's a rather entertaining race against time in the sewers under the city of Yahleui.

The adventure is a free download on google drive.

Reviews:
What the hell is Crimhuck? Well its Shane Ward's sword & sorcery world that he's been slowly building up over the last couple of years or so. Bits and pieces of it have appeared on the Three Toadstools blog & in his various old school adventures. Since this is a Labryth Lord adventure its easy to adapt and modify to your own worlds. I can see using this adventure with Astonishing Swordsmen & Sorcerers of Hyperborea quite easily.  Swords & Stichery Blog - Read more here.

The Mad God's Jest
GET IT HERE

Deep inside the mind of Captain Sherborne, he's cracked.  His dreams haunted by a Harlot.  However nothing is what it seems.  He wanders the world looking for brave souls to help him.  Will you?

*Note this product will remain free, it is in celebration my of 500th blogpost.  Please enjoy.

Reviews:
The adventure is extremely whimsical. The encounter names give it away: “Hot Tub Party!” “Self-Inflicted Torture Chamber”, “Snakes in a dungeon”. As I’m appreciative of whimsy, I found many of the encounters very amusing. The torture chamber has cultists who have locked themselves inside the torture devices. Another cave contains a manticore feeding cultists a strange soup, and yelling at them when they spit it out. It’s all very strange.  Merricb - Read the rest of the review here.

3 Toadstools Publishing is a small table top gaming outfit whose works I've used in the past at my gaming table much to the dismay of my players.There are some really weird themes at play in this adventure and plenty of opportunity for a DM to customize this adventure as they see fit. The Mad God's Jest  has elements of Morecock and Robert Howard style action that would fit right into the world of Astonishing Swordsmen and Sorcerers of Hyperborea or the deeper end of a Lamentations of the Flame Princess campaign set on the coasts of Europe.  Swords & Stichery Blog - Read the rest of the review here.

This one is weird. And not in a good way. Not in a bad way either, but it’s going to REALLY take the right mindset to make something of it. - 10footpole - read the rest of the review here.


The Tomb Of Gardag The Strange
GET IT HERE

A long time ago lived an evil and very eccentric warlord named Gardag.  Over the years he built up a cult following, many flocked to him and worshipped.  He sent out his cultists to pillage and burn the surronding lands.  Eventually he amased a huge stock pile of treasure.
*A OSR module for 4 - 6 Characters Levels 3 and up.  Compatible with Labyrinth Lord (TM).
Includes Pre Generated Characters
Interesting Henchemen
One Hand Drawn Map
24 Encounter Locations
Reviews:
Although not a tremendously ambitious adventure, The Tomb of Gardag the Strange contains some very nice touches and I find it quite charming. It might be a little too deadly for a novice party, especially if they have delusions of their own invincibility, but, nevertheless, it’s worth having a look at.  Merricb - read the rest of the review here.

The download is sixteen pages, plus the fairly handsome cover pictured.  There's a well-drawn map, and although Ward didn't take the time to identify his symbols they are fairly conventional choices ("box" doors, "S" secret doors, etc.).  A few paragraphs set up the background of the tomb in a "once upon a time" style.  Ward leaves it a bit open as to whether the PCs are to be hired to retrieve the remains of a dead hero or just bust in to get Gardag's "huge stock pile of treasure" - this is good! - but also doesn't give the DM any details about what sort of reward would be on offer for the former task.  No area map or details for a nearby settlement are provided.  War beneath the Earth - read the rest of the review here.

Yes. This is great dungeon! It is pay-what-you-want, so it doesn't cost anything to get. So I think this is a must have. Although I think this is worth money, and the money is well spent.  When Shane was writing this I saw WIP and got very excited about it. Now published, it claimed my excitement and gave more.  Crypt of rabies - read the rest of the review here.

This is a solidly sixteen pages of packed wall to wall crawl that does exactly what's advertised on the tin with gusto and vinegar. Here the adventure is built along the lines of solid and well though out adventure with weird monsters, strange bits & pieces, and all of the old school style of dungeon crawling that one expects from an outfit like 3 toad stools publishing. The background of the adventure is weird enough.  Swords & Stichery Blog - read the rest of the review here.

The Lizardmen Of Illzathatch (PWYW)
GET IT HERE

The green dragon Illzathatch has been dispatched by local heroes “The  Shields of Atreu”, thus ending his reign of terror across the countryside. Only one problem remains, the adventuring party left to raid the lair of the dragon, they have not been seen since.  A OSR Module for 4 - 6 Characters Levels 3

Reviews:
There are sometimes when a DM needs a simple, down to Earth straight forward adventure that can be dealt with over one or two sessions of play. The Lizardmen of Illzathatch From  3 Toadstools does exactly that and presents a dungeon master with a clever and well worded OSR adventure that can be cleverly back handed into an existing OSR game or used as a perfect little introduction adventure for your favorite retroclone system.  Swords & Stitchery - read more here.

Much of the background is implied rather than directly stated, which, while it can be an effective technique, does lead to a little too much guesswork in this adventure; an introductory section that properly explained the adventure’s background to the DM would greatly improve this adventure.
Despite that, it’s a fun little adventure. It has a few nice surprises for the players and should provide an enjoyable evening’s entertainment.  Merricb - read the rest of the review here.


The Overrun Mines (PWYW)
GET IT HERE

The local mine has been overrun by foul creatures, stopping all mining operations! The Lord has dispatched a call for brave heroes to clear out the mine, but what lurks below the surface?
*Module includes two hand drawn grey scale maps, optional rules for Underworld travel & ressurection, also 4 pre-generated PC's

Caverns Of Ugard (PWYW)
GET IT HERE

The name Ugard is notorious with pain and fear! Thru-out the surrounding lands Ugard and his minions threaten, bully and extort money and lives. The vile Minotaur is holed up in some caves on the outskirts of town. This OSR compatible one page dungeon can easily be placed into any campaign for a night of fun! *Updated with bonus material & OGL

The Infiltrator
A character class based on the 2nd advanced edition of the world's most popular role playing game.

The Myrmidon
GET IT HERE

Your love is like bad myrmidon,
Bad myrmidon is what I need!
- Signed Guy who makes awesome maps
Ever wanted to play a Myrmidon in your campaign? Well now you can!  Here is a playable character class for any old school game.

The Vagrant
Get It Here

Vagrants are not technically thieves although often they do have some thieving abilities that they have picked up living on the streets of large cities.  What they do possess is an unnatural ability to stay alive.  Whether it be thru trickery, gambling, outright stealing, and on occasion murder.  They always manage to make their way in the world.  More often than not Vagrants are neutral or evil aligned.  Rarely will you find a good aligned vagrant who is just down on his luck.  As far as Weapons & Armour go, Vagrants will only have what they manage to scrape together from various sources: looting dead bodies, stealing from smiths.  Vagrants start with little to no GP's as starting wealth.  (Roll 1d2 x 5, if a roll of a 1 comes up they Vagrant carries no gold)