I maybe creating far too much for this campaign, but who cares right? Going thru the adventure module for the laughing dragon  a gnomish sage named Fonkin becomes part of the first adventure.  I'm hoping that he may stick around and become the wise person in the town of Debinshire, (much like Elminster). I realized as I started to roll his character up that there is the Gnomish class in AD&D, and I honestly couldn't remember ever creating a character like him.  Possibly because Illusionist, doesn't really seem that bad assed does it? and of course the other character a gnome is allowed to play is a thief, it seems to me that any thief I ever created was a halfling.   I originally had grabbed for the Monstrous manual, and then went, hey I should check the PHB first. 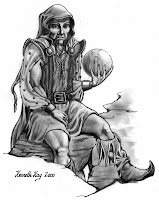 So Fonkin was born.... (I'll put a scan up of his character sheet when I have time).

Debinshire is starting to turn into a humbled version of the Shire and Hobbiton.  The Mayor of the town , Gilabrand The Stout, is a ex thief with ties to a theives guild (of which he owes money too) The Merchant Falcar is a dwarf.  The PC's so far are Half Elf & Dwarf.  I may just stick with the demi human races, and try and leave out Humans for the time being.  Just makes it a little different as a starting point.  Basically a place where Demi Humans can gather, whether they are outcasts, or moved to the town because it was a "free town" per se, or maybe they came because of Gilabrand?

it opens up some interesting possibility's for me.

Posted by shanepatrickward at 9:35 AM