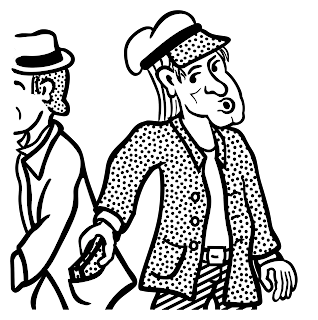 This coming from the book I'm currently reading.  Picture this, a very large city that is broken up into territories between 2 competing thieves guilds.  The PC's are a small time thieves guild band, looking to start shaking things up within the city.  They are met with resistance and outright hostility from some of the other guilds within the city.  They do have friends though, the beggars of the city have taken a liking to them.  The beggars are the eyes and ears of what is going on within the city.  The two larger guilds are trying to rub each other out, putting out contracts for bigger egos within each guild.  a NPC named Wolfgang de Soldberg is the leader of the young upstart guild of which the PC's are involved with.

Moving up within the ranks will not only depend on XP for fighting, but also for treasure stolen.  As time goes on, the PCs may become larger more important members of the new faction, often recruiting other thieves and going on more difficult jobs.

Playing politics the PC's may have to make an alliance with one or both of the other guilds.

And of course there are other forces at work.


Posted by shanepatrickward at 1:25 PM