You know what? I'm perfectly happy being a Grognard 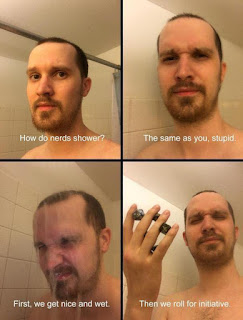 Honestly I am.  I've been involved in a few discussions latetly that have led to the "Old school vs New school" thing.  As much as I understand both sides of an argument, and I am empathetic to were someone is coming from (and vice versa hopefully), I still have the view point of Old School being better.  I get it, it's not a contest obviously.

Here's a case in point:
At some point I'll probably have to run a game for the new 5e group.  I started writing out a adventure plot outline thingamabob. Thoughts running thru my head as follows:  Alright check the CRs, make sure they have time to rest safely, hopefully there is a bit of roleplay in here, but not too much because some people don't like it.  Obviously the CR thing is highly annoying coming from an old school guy stand point.  I have to make sure that the encounter is tough, and level wise it matches but they don't die? Why can't they die? Well first things first, it takes for fucking ever to create a character.

I had a discussion with a friend of mine about "balance", and he basically said "Your not going to chance my mind, I like balance".  Balance is a DM illusion.  In this new school game I can fudge the whole damn thing behind the screen.  However next time I DM I won't be doing that at all.  Roll in front of the screen and watch with glee when the terror strikes.

The simple gist is that I understand how to be a new school player/DM, but when I run a game it's going to feel like an old school game.  Because that's what I am.  Balance is getting thrown out the window.

"There is an old dragon who lives in a cave not far from here" says the Innkeeper.  "I've also heard that a bunch of kobolds have been robbing people a few miles from town".

There's your two choices.  Now keep in mind that dragon is not a small youngling (like in lost mines of phandelver), nah he's a big ugly bugger who has the whole legendary stats, the ability to do things within your turn etc.

So if the players want to take the bait at first level, they can go right ahead.  There is a very good chance they will end up as a crispy treat.

I've recently been watching Venger's youtube channel and he's been talking a lot about the old school aesthetic and how to bring it to new games.  Here's the thing, it all comes down to how you want to play it, and every DM is different.  It seems that the games I've been involved in are very by the book.  Which I'm okay with, but if it's my game I intend to run it differently.

There was a good article about session 0, and I will probably do that at some point.  Once I get everything figured out first (house rules wise).

I also think that I'm going to stop getting into long drawn out conversations about this.  Because it's very hard and time consuming to sway someones opinion and honest there's no point.  Play the game the way you want to.

The whole balance conversation started when I sent this video to my friend. The guy brings up some wonderful points, and he sells playing old school very well.

Anyways, long story short I'm a grognard and I'm totally fine with it.  And I think that how you learned to play the game will always affect how you actually run the game.  So you know what?  "It's a big world and some of the monsters are going to be above your pay grade".