Take me down to ramble city, where the dice roll 20s and the...... GAMER ADD POST 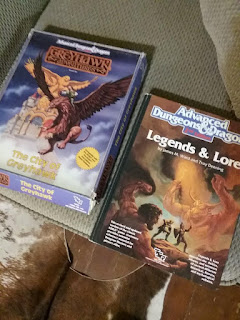 My new job is going so well. It's a lot of fun. The other day was a Monday and it didn't feel like a typical Monday. Sold a guitar to a kid, and he skipped out of the store super happy.

As soon as I learn the job better I'll probably try and get back to gaming. I am hoping to get back into the isle of dread sessions.  I intend on setting up a game for hopefully next week sometime.  Although I'm having the "Maybe I should run this adventure or system" A.D.D. thing that I typically get.  Trying to run a long term campaign is not easy!  Mostly because some new shiny thing shows up and I'm like "YAAS!!!!"

Looks like I'll be getting Wednesdays off for the foreseeable future.  Which is going to be writing day for me.  I have a crimhuck adventure I want to finish, and an old one that I need to layout (and do a wholesale rewrite).  As well I have to finish my layout work on "Mythical Journey's", which is going to be pretty cool!

I just created a Mewe group for people looking for games.  It came about for a few reasons.

There used to be a great group on facebook called "OSG - One Shot Group", where lots of people would post games and get them going.

In the regular OSR group on mewe, there's so much promo that a lot of things like "wanting to run a game posts" get lost.

There's a lot of cats out there that want to game, but can't find players for their specific time zones.  I am hoping that people can meet new people and play games!

As for me and my schedule, I am really hoping to try and get something going on a Wednesday if possible.  Maybe the afternoon, if some peoples are up for it.  I know that's a total shot in the dark.  Currently I'm playing in Tim's monday night game (sounds like we are going to be kicking ass and taking names next week).  Unfortunately I really can only set aside nights once a week for games, other than the ones that my wife isn't home.  With the new job/schedule time is at a premium.  That and I have band practice on thursdays, so that eats up a bunch of the week.

I suppose I'm trying to do too many things at once.  But hey you only live once right!

After receiving an awesome package from Steve in the mail, I'm devling back into 2nd edition and loving it! He sent me the "city of greyhawk" boxed set and Legends and lore.  So as usual I'm so friggin torn!

Here's the silliness that has pervaded my head in the last few months:

Mystara campaign with b/x, lots of Basic fantasy adventures.  Starting in the small town of Luln.

Greyhawk with 2nd Ed, in the duchy of geoff and the vale of the mage (or whatever it's called).

Now a campaign set in the city of Greyhawk.

Despite the fact that I'm not a Forgotten Realms fan, I started looking at the 2nd Ed FR campaign setting, and fell in love with the adventure and the Dales again.  Ugh.

Alternatively I've been considering fleshing out my 10 Monster Setting and running a game there.

oh and a whole bunch of other random ideas.

I think I should just write a random table, and then roll on it and that'll be the campaign I'll run.  It might just be easier!

So obviously I'm leaning towards second ed and some Epic fantasy.

Part of the problem is there's always something new that catches my eye.  I question how some people can just stick with one thing and go.  I remember when I was a kid looking at the 2nd Ed books and I started building this world (because of course I didn't have any actual campaign book and no one to bounce ideas off of).  I hate to say I long for those days, but sometimes..... hahah.

Part of the problem is I want to have fun creating and I want to make sure the players are always having fun.  If that means jumping ship from a scenario to another one, so be it.

So many ideas, and so little time.


Posted by shanepatrickward at 7:53 AM