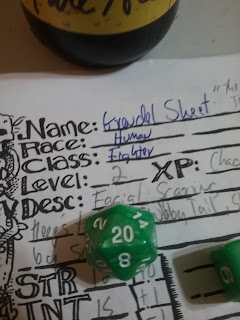 2 giant crocodiles just came out of the water, and my character had the last watch and noticed.  I yelled and everyone starting waking up.  The wizard nikola decided against putting any clothes on and ran out firing magic missiles.  He also grabbed his 10 foot pole to try and swipe at the crocs.

I managed to roll 2 crits in the first couple of rounds doing double damage.  (House rule, you roll a crit, and you get to roll 2 damage dice, not a duplicate of whatever you roll).  Mr. Wizard Nikola throws some oil and basically makes a mall-toff cocktail.  Thankfully most of us are out of the way when the crocs get lit up.

I decide 2 things.  My non-descript shortsword I grabbed is now dubbed "Crocsbane".   Secondly my character has decided to start collecting teeth of the victims of his sword.  So now I got a small sack with croc teeth in it.

We all get into it start fighting these buggers off, and its really close.  Everyone is pretty beat up afterwards.

The decision is finally made to make our way north to the town of FOB, first off to find some kind of healing if at all possible, and secondly to track down this army we are supposed to spy on.

We set off, and the rest of the day goes by with nothing out of the ordinary.  We have all slightly recovered, but are still pretty beat up (let's say half the hit points that we started with).

We make camp for the night along the shoreline, and only a couple of watches go by and all of a sudden 7 pirates (including a 2HD captain) come ashore.  They request all of our money.  The bugger of that plan was we honestly needed the money, basically for any kind of healing.

And a big fight ensues.  The wizard attempts to knock them over with his 10 foot pole, there's some meager results.  Everyone is going down like flies.  The thief, wizard and dwarf warrior are down for the count.  My wife (Roseanna the cleric) and I are fighting these pirates like crazy.  We are backed up against a corner, fighting shoulder to shoulder.  I roll another 20! and slice the captains head clean off.  The pirates panic, one makes a run for it.  And we finish off the remaining couple.

Roseanna is completely out of healing spells.  So we load up the 3 other characters onto the back of the donkey we got.

Who has know been dubbed, ASSBULANCE!

And we head off to FOB.  Thankfully all the various gods were looking out for us, and we make it to the small destroyed village.  (It had previously been lit up by a raiding army).  We start off looking for some kind of healer, stumble into one who of course has a quest for us! (Atleast I believe he has a quest for us). And that's were we capped off the night.  So much fun.

Oh and these are my new favourite dice!  I got a pound of whiz dice awhile ago, and in the bag there was a small cloth bag with green ones.  These are now going to be my dice, (well until they fail miserably).

The other thing I decided was that originally my name was Grendel "No use for a last name".  Now its going to be Grendel Sheet (as I wrote sheet for some dumb reason, while filling out a +James V West character sheet).  His nickname is going to be "The tooth fairy", cuz of reasons above.

You can get James's basic fantasy character sheet on the website here: http://www.basicfantasy.org/downloads.html


Posted by shanepatrickward at 7:32 AM