It's your turn Frank! - Interview with Frank Turfler from Middle Kingdoms Adventure and Trading Co

I got started in 1981 with Moldvay Basic D&D, I was 11. I remember being in a game store in the Whiteflint Mall in Montgomery County, MD. and the first thing that caught my eye was the AD&D DM's Guide on display behind the coolest miniatures. That day I bought my first mini and shortly after my Grandmother bought me the Basic Boxed set. I didn't know anyone else who played D&D at the time, so it was just me, my younger brother, and Nana trying to figure it all out. It wasn't until a few years later 1982 or 1983 after moving to Western PA that I started playing AD&D regularly with a group of friends. Most of us still keep in touch today. 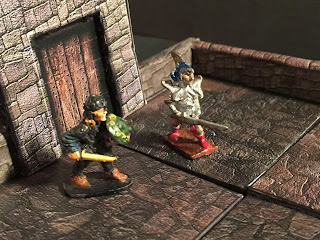 I've always been drawing something for as long as I can remember. It probably started with the introduction of solid food. I got serious though at 12 when a friend and I started our own comic book. I continued drawing comics and fantasy art through High School and then later attended Parsons School of Design in NYC. Paying bills as an artist didn't pan out so well for me so much of that creativity was poured into editing movies and TV shows.

3.  How and when did you discover OSR?

I got started in 1981 with Moldvay Basic D&D, I was 11. I remember being in a game store in the Whiteflint Mall in Montgomery County, MD. and the first thing that caught my eye was the AD&D DM's Guide on display behind the coolest miniatures. That day I bought my first mini and shortly after my Grandmother bought me the Basic Boxed set...

But seriously, after High School, there wasn't much time for D&D so I took a brief 22 hiatus, coma really, and when I came back to gaming 3 or 4 years ago, I just opened my old AD&D books and started playing again. I was running a game for my teenage daughters (at their request actually) and in my search for new adventures I found Dragonsfoot.org and it probably snowballed from there.

4.  Tell me a little bit about the last few projects you’ve worked on.

I'm always working on something. Although it’s been a while, I try to contribute as much as I can to the DCC zine “Crawling Under A Broken Moon” and the AD&D Magazine"&". Much of my time currently is spent working on illustrations for Genius Loci's Pyramid of the Lost King, Cartography for Darksmile Games' "Fae Nightmares" for Savage Worlds, Cartography for Obatron Productions new Savage Worlds setting "Retribution" witch is currently running a Kickstarter. As well as illustrations and maps for my own projects.

Pyramid Of The Lost King 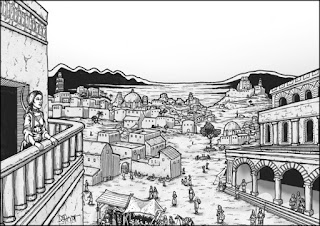 Crawling Under A Broken Moon 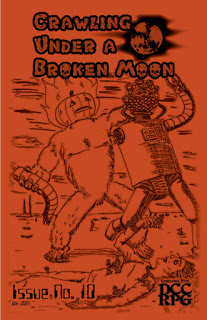 I run a semi-regular Labyrinth Lord (B/X) Barrowmaze game for my family and occasionally I have time, I play with my local group of friends in a 5E home brew campaign. I also get an occasional Savage Worlds one shot in and there are SO many other games I'm itching to play.  When I came back to the gaming world a few years ago, I was amazed at how the entire landscape had changed. There were a lot of new games that i had never heard of and new ones seemed to be popping up every day. Since then I've been collecting RPGs and reading them like novels. Just a few that I've been itching to try are Fate (both Core and Accelerated), Dungeon World, Numenéra and the Strange, and Beyond The Wall, but that probably only scratched the surface. 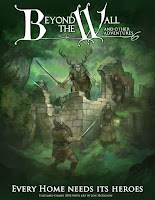 Editors note:  I just checked out beyond the wall for the first time, wow! this looks like fun.

6.  If you could campaign in any world which would it be?

If it wasn't my own home brew world, it would have to be Greyhawk.

Editors note:  I asked about Franks home brew world…
Well it's in a galaxy far far away...
or maybe some inter dimensional pocket? Maybe its just all in my head. ? GET IT OUT! GET IT OUT!

Seriously though, I used to make these epic worlds like Egeszfold, a world where the original race of Egeszfold, the Deému, were created by the god Egysten to tend Egeszfold as his garden, but in time the Dému grew proud and began to tend to the garden for their own pleasure ignoring Egysten and seeking to become gods themselves. They erected five towers to rip a hole in the fabric of space and time and open the very doors of heaven itself, but when they did they created the Sundering and opened doors to great cosmic horrors that exist in the universe that had since fallen into a deathlike sleep— horrors that were never meant for this world. Egysten chose to save his creation from the evil they unleashed on themselves and destroyed the towers in a great cataclysm. With an ancient evil now present in the world and the world in chaos, Egeszfold fell into a dark age.

Xanadu, a hedonistic utopian society established by pilgrims on the Asteroid, Shakespeare 2112. There the pilgrims built a shining city in the heavens, a marvel of technology and order. To maintain order and balance, the Founder created a quasi-religion. A large part of this new religion is that a person's maximum age is strictly legislated. When people reach their final day they participate in a ceremony known as Inception. Not everyone however participates in Inception, over time there have been some who have been elected by The Founder's Ghost to remain. This elite group is known as the Paternals. The Paternals act as a governing council and high priests of the Founder’s Order. No one is allowed to see a Paternal directly and as such their actual existence is shrouded in myth. Of course not everyone in Xanadu believes in the doctrine of doctrine of The Founder’s Order and for those who do not believe there is only one way of avoiding Inception RUN. There's one catch; no one is allowed on or off Shakespeare 2112.

More recently I've been interested in small local worlds—like the size of a large rural community or an area contained by major geographic borders like mountain ranges, seas, or weather phenomena like dense fog or violent storms.

7.  How is your Patreon going?

My Patreon is going rather well. I like to think of myself as an accidental cartographer. Making maps was never something that I thought I would be doing outside of notes for my own adventures. When I came back to gaming, I started buying miniatures and needed terrain and battle maps to go along with them. I discovered DMScotty's and TheDMGinfo's Youtube channel and started making custom and modular cardboard tiles. When I realized that I could just create my own custom maps and print them out, making them available for everyone was the natural next step. 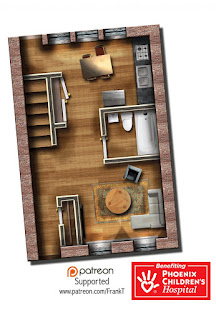 8.  Tell me about the middle kingdoms blog, what’s going on over there!

The MiddleKingdoms blog was started as a diary of my efforts to learn how to design, write, publish and market a style of adventure module that would fit my gaming lifestyle—not enough time for prep and only 2-3 hours of table time per game.  Since then it has grown to include Free Map Friday where I try to produce a location map or battle map every week (I do miss a week here and there when life gets busy.) 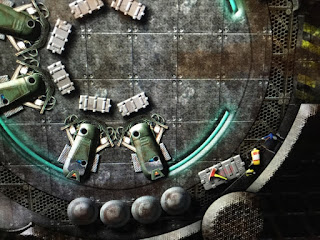 9.  Have you written any adventures that we should know about?

About a year ago I helped my then 7 year-old son publish an adventure, "Raiders of the Forgotten Treasure" it was a blast. He designed the entire dungeon crawl encounter complete with several monsters which he designed himself. I helped him put it into words and of course did all the maps, art, layout, and design. 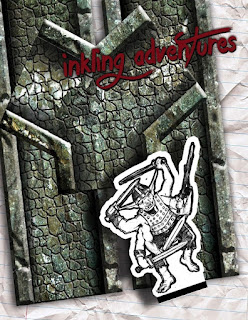 I'm still working on the serial adventure project that kicked off on my blog, and in May I got the White Star bug and started writing a Gothic Horror/ Sci-fi adventure, Heart of Darkness—my take on a Ravenloft Space Opera.  Heart of Darkness is just about finished I just need to play test it (any takers?) and finish all the art and cartography. Its a bit of a different take on traditional OSR modules in that I drew a lot of inspiration from modern games like Dungeon World and Numenéra in the presentation of information. I wanted an adventure you could pick up and run with very little prep and doesn't get in the way of YOUR story. In the process, with help from Eric Lamoureux it's also been converted to Savage Worlds.  I truly do have some big plans for the Heart of Darkness adventure (the horror/Sci-fi adventure) I'd like to make it into an interactive PDF with a soundtrack, sound effects and some visual treats too. Here's a little soundtrack I threw together for a promo I'm planning to produce.
﻿ 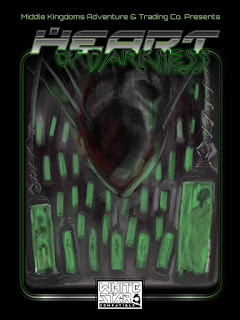 10.  I noticed that you work with the Phoneix Children’s hospital, tell me about more about that?

When I was setting up my Patreon I wanted to use some of the money to help others in need; my son was in the hospital, phoenix Children's Hospital actually, and while sitting in the hospital I asked my family what charity I should give some money to. Their response—Duh! The Phoenix Children's Hospital Foundation. I have a goal to be able to run some games there in the future.

11.  When you get a chance to play a character, what type of PC do you like to play?

While the personalities of my PC's tend to be very complex, the type of PC I play is usually pretty basic—Fighters usually. Once in a while if I'm feeling adventurous I may play a Dwarf (Eastern European accent though; none of that Scottish nonsense.) 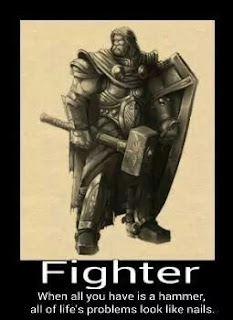 12.  What are you most excited about in the RPG scene currently?

There's just so much out there it’s hard to pick. I still get excited to play all the old stuff, but I'm really looking forward to playing some Cypher System games, running a DCC funnel for the family, and that new Goonies inspired RPG. What, there isn't a Goonies inspired RPG? There should be. Who wants to help me make it? 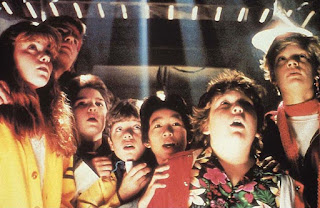 When given a choice of either or I always pick both. BTW you gonna eat those pierogis? 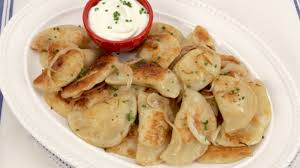 Editors note:  The local church in my area has a fundraiser once a month, its all you can eat perogys! I'm going next week.  If you've never had a perogy, go find some! They are delicious.

14.  What are the plans for Middle Kingdoms Adventure and trading co this year?  Anything in the works?

There's always something in the works and there is currently a top secret project in the works. 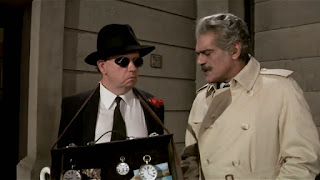 15.   And of course anything else you'd like to add to this interview?

I could add so much more, but right now my wife is staring me down because I need to help with dinner. :)

Editor’s Note:  I seem to have this same problem.

Posted by shanepatrickward at 7:42 AM