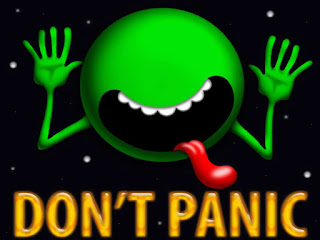 I've often waxed about the idea of running a one shot hitchhiker's guide game.  Here's 20 adventure plots.  It has been suggested that I give Rissus the anything RPG a go for this.

2.  Discover what happened to the universe's smartest computer.

3.  Write a friendly review of the restaurant at the end of the galaxy.

4.  The intergalatic fax machines are down! You will need to get a news report into a publishing company on ursa minor in less than 2 days!

5.  Obtain the rights to create a new version of earth's moon, consult with the magrathean's

6.  Zaphod has went missing once again, a witness states that he may have fallen into a black hole! Find him.

7.  The entire universe is all of a sudden really really thirsty.  Find out why.

8.  In an alternate universe where bulldozers have feelings, console the one that wanted to demolish Arthur's house.

9.  There is a grand shortage of babel fish in the universe.  Travel to megalith 19 to find out the reason behind it.

10.  The cue on Vogan is incredibly long,  it appears that a bunch of random strangers have decided to have their baby's in the line up.  Make your way to Vogon and help deliver children.

11.  Tea has been discovered on Canis Major, since you haven't had a nice cup of tea in years.  (well ever since the Earth was unfortunately exploded on purpose maliciously), its time to go find some!

12.  You've heard rumors that there is in fact a relative of Marvin's living on Scorpius 9.  The only problem is these rumors are written in a very old book, you may have to find a way to time travel.  Which really shouldn't be that hard for a human should it?

13.  It appears that the GREAT SNEEZE may in fact happen again, the second coming of the sneeze some say?

14.  God's final message to mankind has been replaced with a very large sign of a restaurant chain.  No one knows what became of the sign.

15.  The rise of a league of super strippers has become a major problem on the not entirely harmless, well quite in fact very harmless city of Han Dold.

16.  The planet Krikkit hasn't been seen for days, some have suggested that it might in fact be just taking a break.

17.  In a different series of events, baseball (which is not only America's favourite past time, but most of the galaxy as well) has been replaced with Curling as the official sport to watch.  The Scottish and the Argothalgians are quite excited by this prospect.

18.  There has been talk about the new "Restaurant at the beginning of the universe" being quite pitful as far as food selection goes.  Someone must write a review for the guide.

19.  A fleet of Garokflakids has been seen orbiting neon label 23, their ships are giant vacuums.  The populace is quite worried.  Although some of the population suffer from allergies and don't think this is that bad of a plan.

20.  The un-ending limbo competition has been halted because of the loss of the limbo stick.  A patron at the event went to get a gin & tonic at the bar, once he got back into line, he tripped over a rather nice looking alien from the planet SETI who then in turned fell into the limbo holders.  It appears the limbo stick is in fact in limbo.


Posted by shanepatrickward at 12:26 PM