Here's the thing, when I write my own stuff, I only have me to bounce ideas off of. Which is all fine and good, but it's like playing guitar by yourself (or other things) it's a whole lot more fun with more people! Pardon that stupid innuendo. The last few days I get to work, fire up google drive and see what's been happening with the blue baron project. Read something cool, and then I'm like "Alright Shane let's see what we can do this morning!" It's not that its a contest, it's just inspiration. So here's some hirelings. I hope to write a few more before the project is done. If you want to jump in on it here's the community link: https://plus.google.com/u/0/communities/104980520414500054316 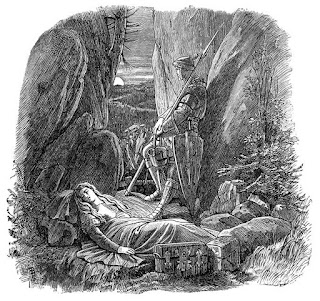 If the players find themselves with a lack of extra  muscle they can hire a few of the following peons.

Sige The Mighty:  (Human 1st Level Fighter)  Sige isn’t actually that mighty, although he claims to be!  If met by the players he will boast about all of his previous accomplishments as a fighter.  All of which he has borrowed from legend and twisted to be all about him.  Clever players may catch on to this.  Stats:  STR 5 INT 4 WIS 12  CON 10  DEX 8 CHA 14, Long Sword, Leather Armour, Shield.   Cost:  2 SPs a day.

Findeli Lonevris:  (Elf 1st Level  Magic User)  Findeli came to the city in search of knowledge, having exhausted the library’s from home.  He is a loyal helper and will do his best to keep any situation under control.  He is however curious, when it comes to anything ancient or puzzling.   Stats: STR 10 INT 14 WIS 9  CON 9  DEX 10 CHA 7.  Findeli is unarmoured, he carries a staff, a short bow and a pocket full of marbles.  Spells:  Magic Missile. Cost: 1 GP a day.

Riffolk Mythey:  (Human Cleric 2nd Level) Riffolk is a follower of Najin the goddess of the moons.  He is a hardy cleric, muscle bound and headstrong.  His only fault is that he never learned to speak well, and tends to drop words when talking.  Stats:  STR 16 INT 9  WIS 12  CON 8  DEX 9  CHA 3.  If the players agree to pay a tithe to Goddess (100 SPs) he will stay and help as long as he is able to.

Heaher Leah:  (Human Thief 1st Level)  Heaher spent some time as a for hire assassin, but was kicked out for being far too brutal on her contracts.  She has since led a life of crime, just making ends meet.  She won’t think twice about stealing from her employers or running if things get bad.  Stats:  STR 10 INT 12  WIS 9  CON 8  DEX 12 CHA 13.  Cost:  3 GPs a day
Posted by shanepatrickward at 6:51 AM

Email ThisBlogThis!Share to TwitterShare to FacebookShare to Pinterest
Labels: blueholme, OSR, return of the blue baron