Jorge & Scott have been busy!  They wrote an adventure called "Slime Bugs" for Mutants & Mazes. 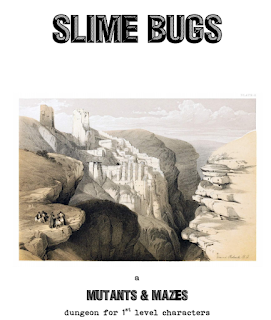 Mutants & Mazes is what happens when you combine Dan Proctor’s Labyrinth Lord & Mutant Future. But that doesn’t mean you need to run a hybrid campaign to make use of this little adventure. You can drop this dungeon in your campaign, either classic fantasy or gonzo post-apocalypse. It can be useful for when your players need to locate a special item; just put it in rooms 3, 10, 16, 19, or 23.

Or it can be just another labyrinth or ruins to explore.

You don’t need this to run the adventure, but it can be of interest. Feel free to ignore it and come up with your own backstory if it better fits your game.

*  The main structure of the dungeon (rooms 9 and 10) are halls from a fallen dwarven empire. Its exquisite manufacture is still noticeable and quite striking.

*  All other rooms and corridors were added long after the fall by a decadent race, of an obviously inferior craftsmanship.

*  This decadent race worshipped a weird entity, a pot-bellied toad covered in fur that resembled a sloth and a bat, known as the Sleeper.

*  The necromancers among this race tried to merge with their god but their dark alchemy failed, turning them into black quicksilver instead. The survivors have kept the cult alive through the generations, awaiting the return of the Sleeper.

*  Normal life became impossible in the dungeon. Now only oozes, slimes, jellies, moulds, and bugs can live in this unhealthy environment.