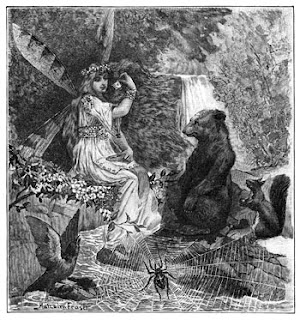 In the not to distant future, the PCs will be plunged into the Fairy Mists, a world between worlds.  There they will be looking for an ancient artifact that was lost during the time the god's walked the world.  As it is with everything, there is good and evil in the world, this holds true for the Fairy mists.  If you think of it as a reflection, there will be good fairy's, bad fairy's, unicorns, alicorns, somewhere in the mists the PC's may fall thru the reflection into the evilness that awaits.  There they may find their death, the artifact, themselves.....

Such that it is, random events will occur within the mist, here's but a sampling of what to expect.

Random Events In The Mist.

1.  An interesting tea party, with a similar cast, but a twist.

2.  The black mist!  A cloud of noxious vapour that pursues.

3.  A clearing of dancing skeletons.

4.  A pool of brackish water, with healing properties.

5.  Giants who speculate about the stars and philosophy.

6.  A large tome, 8 feet wide by 4 feet deep.  Untold secrets are contained within.

7.  A large chessboard complete with golems as pieces.

8.  A magical lute that plays songs by itself, listening to it may cause good or harm.

9.  Character doppelgangers, its as if they are looking in the mirror, complete with repeating everything they characters say and do.

10.  A black cat crosses the PC's path, and then another.

11.  A group of evil nymph's playing in a small snow fort.

13.  The forest path winds upwards, around, sideways and down.

14.  A wonderful old lady who sings magical songs, they cheer up the PC's and are able to rest without interruption.

15.  A trans dimensional door on the side of a tree.  The issue, the door is 4 inches wide, and 6 inches tall.

16.  A treant that believe it is a comedian performing stand up.

17.  A thunder shower of sorts, what falls is gumdrops.

18.  A herd of woolly mammoths the size of house cats stampedes at the PCs.

19.  A god trapped in the mists, believes he is the reincarnation of one of the PC's relatives.

20.   A chariot made from a pumpkin lies in the middle of the road broken down.

Posted by shanepatrickward at 10:32 AM