Greek Gods & The opening to "Escape From Goblin's Greed Isle" 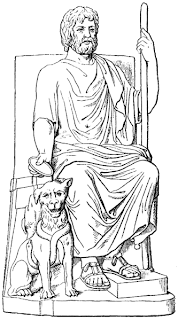 I've been doing a bit of research about Greek gods, and I've found some strange inaccuracies.  The 3 Main gods being Zeus, Poisden and Hades, however in a book I was just recently reading (which is apparently historically accurate) it states that the 3rd brother is not Hades, but in fact Pluto or Dis, and the underworld in which he rules is called Hades.  The question becomes, which is the correct one?

The following is from Wikipedia, which seems to make a bit of sense.

Hades (/ˈheɪdiːz/; from Ancient Greek Ἅιδης/ᾍδης, Hāidēs; Doric Ἀΐδας Aidas) was the ancient Greek god of the underworld. Eventually, the god's name came to designate the abode of the dead. In Greek mythology, Hades is the oldest male child of Cronus andRhea considering the order of birth from the mother, or the youngest, considering the regurgitation by the father. The latter view is attested in Poseidon's speech in the Iliad.[1]According to myth, he and his brothers Zeus and Poseidon defeated the Titans and claimed rulership over the cosmos, ruling the underworld, air, and sea, respectively; the solid earth, long the province of Gaia, was available to all three concurrently.
Later the Greeks started referring to the god as Plouton (see below), which the RomansLatinized as Pluto.[2] The Romans would associate Hades/Pluto with their own chthonicgods, Dis Pater and Orcus. The corresponding Etruscan god was Aita. He is often pictured with the three-headed dog Cerberus. In the later mythological tradition, though not in antiquity, he is associated with the Helm of Darkness and the bident. The term hades in Christian theology (and in New Testament Greek) is parallel to Hebrew sheol (שאול, "grave, dirt-pit"), and refers to the abode of the dead. The Christian concept of hell is more akin to and communicated by the Greek concept of Tartarus, a deep, gloomy part ofhades used as a dungeon of torment and suffering.

That being said, he is the opening to "Escape From Goblin's Greed Isle"....

You’ve just awoken from what appeared to be a very vivid & real dream. An ancient God swathed in flames, came to you and said that you would be tested! You have been coasting thru your adventuring life, gaining experience and treasure fighting off hordes of low level creatures. Now is the time to prove if you do in fact have the guts to survive in this unforgiving world. As a token for completing the adventure, besides your life, the God has decided to give you 1 magical item of your choosing. (GM’s Choice). Rubbing your eye’s you realize that you are not in the bed that you slept in last night, but instead lying on a stone altar, in an open-air building surrounded by large intricate columns. There is a small pool of water near you, a forest lies to the North, to the South you can see water. A small creature about 4 feet tall walks up to you. He is covered in hair, and has the lower torso of a goat. Upon his brow are to small pointy horns. He looks to you and says.
“I see NEW adventurers, Hades has been busy again! My name is Ellhern, a Satyr, and some would say I’m your Narrator? I am in the employ of Hades, and as you can see you are not in the land that you previously were in. In fact you are not even in the world you are in. This is one of the domains of Hades, welcome my friends to “Goblin’s Greed Isle”. Know you may ask how did I get here? The answer is Hades. You may ask “Why am I here?” Once again, Hades, he wishes you to prove to yourself and to him that you are in fact a Hero! Many have come before you, some have survived, more often most have perished. There is only one way off this Island and that is thru Hades. You will need to find a list of very specific items, which I will provide to you. Once you have found these items you are to make your way to the Shrine of Hades, and place them on the altar. “

Posted by shanepatrickward at 6:11 AM