WOW Did I learn a lot this weekend. (keep those dice a rollin!) 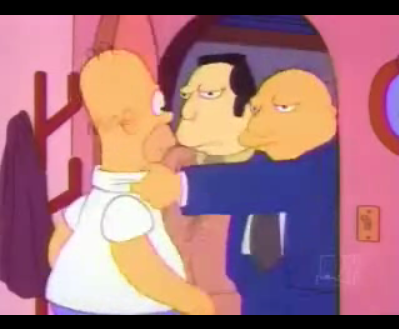 I was finaly able to play a game this weekend, and here are a few thoughts about it, future endeavors (ie Dungeon Delves), and some seriously hysterical things that happened during the adventure!

Whilst playing the PC's had hired some mercenaries to accompany them back to the Caves Of Chaos, this was there second time being there, and had nearly died the first venture out, so they figured it was best to have some extra muscle.  I rolled up 2 quick "minions"... I was trying to come up with names for these guys (I need a names list!)  and one of my players turned to me and said "just call em Hired goons"... ala the simpsons.  So that's what ended up on the paper, Hired Goon #1 AC6 HP6 etc.  hahaha!

During the second raid on the caves, the PC's fought thru the goblin caves, I extensively used BREE YARK! Which I absolutely love btw.  They finally ran into the room with the Ogre, the goblins paid him his 250 GP for help, and he decided to come lumbering into the room and give them a hand.  (as I really don't like killing PC's off to early, see below) I decided to decrease the Ogre's HP total and his treasure to give the PC's some experience and some fun.  As they were getting a touch bored with just killing goblins (you walk into a room, there's more goblins....) I had talked to one of my players and said here's how the game sorta works, if you roll up a low intelligence you need to play a bit dumber than you normally would.  And also to think outside the box when killing monsters,and playing etc.  Well he did just that! He suggested he take the 50 ft of rope, give it to the hired goons and have them run around the ogre, just like in Star Wars 5 with the Walkers and the A wings.  I rolled some dice behind the screen, said yup that'll work.  I gave them some experience, and had them test the dexterity skill of the hired goons and viola! dead ogre.

So I'm hoping that was entertaining.  now for the meat and potatoes of the evening.

We started out the evening creating characters, which my wife found quite boring soon enough.  However they pressed on, and after they were done creating I introduced them to the keep.  Actually scratch that one of my players, did, he read the opening from the "Keep On The Borderlands", but the real funny stuff in-sued, as he read each paragraph in a different accent!

After I made them go around the town and meet the smith , trader and the Inn, buying equipment and stuff.  I started giving them rumors.  One of which was the mad hermit.  They preceded to go out and try and find him.  I gave them some time searching and then had the hermit show up out of the blue, claiming he was a priest of the church of nature.  He of course had to have a nervous tick, so I had him say "meow" at the end of ever sentence.   He decided to come with them on an adventure,  about 10 to 20 minutes later, on the way back to the keep I the mad hermit's mountain lion appear out of nowhere and start attacking.  As the first round closed the PC's were surprised that the old hermit had pulled a dagger on them!

At one point during the adventure both mercenaries died, and one of my PC's said "Okay we drag them back to the keep by there beards, and if they want more money we will take it out of there Inn money". Meaning they would pay the hired goons week's stay at the Inn.

Thankfully I had the smarts to write down some names for the Inn , trader,etc in the Keep, here they are...

The Tavern - The Balding Minotaur
The Smith - Blackened Tongs.... although as time went on it became Blackened Thongs
Trader - Gradak's Fine treasures from near & far.

I couldn't quite decided on which adventure I wanted to run, as I had about an hour before one of the PC's was going to show up at our house.  What I've come to realize is that I like fast & light systems, with a bit of back story.  Not that there is anything wrong with OSR D&D B/X , and as a side note I'm still planning on purchasing the B/X downloads.  But here's the issue I was having....

I kept looking at the Chaotic Caves & Basic Fantasy, since I hadn't ran any Basic fantasy, I had originally thought I'd give it a go, but the bigger rule book & the not having much experience playing it, made me think otherwise.  (ascending AC and lots of extra pluses)

I decided instead to grab Blueholme prentice rules & the Keep on the borderlands, as it was 2 small books, I was already pretty familiar with the rules and descending AC, etc.

I did a bit of mashup, using mostly the Basic D&D information inside the Keep on the borderlands, (weapon damage, thaco's etc) and any other information I needed I found in the Blueholme book (seriously its like 15 pages! super handy)

Alright now for the complaining (damn it this is a long post!)

This isn't so much complaining as "I need to become a better DM!"

First, while running the keep on the borderlands , I really should have read thru the whole adventure once or twice, and written some more parts to it.  A few times the PC's would come into a room, and I'd be like "okay give me a minute"... and then it would take longer than that, and I'd start getting "Loading....."  Obviously being a good DM takes practice first and foremost.

Further to that, Even though I quite liked the Keep, it left a lot to be desired on the part of the PC's, Which is why the next adventure I run is going to be more along the lines of "you need to do this", rather than an open ended sandbox.  For me, I think its more imperative for plot lines and NPC's.  when I think of it, the keep, its really just a meat fest.  I mean don't get me wrong, I really like it as a module.  But I need a little something more, (OR I SHOULD HAVE WRITTEN MORE!)

Another thing I have to really get better at is combat, thaco, calculating hits, etc.

remind me one day to have a discussion about proper role playing of monsters.

Three - Never tell your player's under any circumstances that you've fudged some numbers here and there.

Five - Yesterday I had a discussion with my wife about playing D&D and she hadn't realized that its not a game about winning but a game about having fun.  I made her read the opening to Blueholme on "winning", (you can find the same type of paragraph in countless other retroclones) but it really does put the game in perspective.  The biggest point for me was the Character death thing, I always have a tendency to want to keep the players alive, atleast for a little bit.  But in the little write up it says "PC death is just one thing, you can always roll up another player and continue.. the campaign isn't over till everyone agrees its over".

So inclusion, I have a lot of work to do, to be a better DM.  I still plan on playing B/X, but I think in the future I'm going to work on more story oriented adventures rather than straight hack n slash, (which is what the keep felt like).

The biggest thing is becoming a better DM.

Posted by shanepatrickward at 6:58 AM