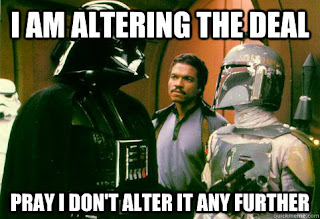 I was thinking about the scene in Star Wars where Vader is talking to Lando about Han Solo, and the deal they had.  Of course being a bad guy Vader alters the deal.  Which got me to thinking about RPG's and how to handle the "deal", with the Heroes.

Of course the best bet is to not always be completely straight forward with the PCs.  Not only does this make for an interesting NPC. But it also can lead to more quests, and maybe a showdown at some point.

1.  The NPC offers double of what was originally agreed upon.
2.  The NPC offers half of what was originally agreed upon.
3.  The NPC decides that the work the PC's have done was insubstantial and refuses to pay anything.
4.  The NPC wants more, sends the PC's on a second quest.
5.  The NPC acts like he/she has never met the PCs.
6.  The NPC decides that the PC's are lying about their true intentions.
7.  The NPC believes that the PC's acquired some materials via illegal activities.
8.  The NPC tells the PCs that they brought the wrong thing.  (regardless of whether its right or not).
9.  The NPC tells the PC's that item/quest in question was a mistake, and that it is no longer needed.
10.  The NPC wants to keep one of the PC's hostage and sends the rest on a different quest, that maybe related.
11.  The NPC should not have sent the PC's on the quest, he/she has no authority to do so.
12.  The NPC thinks the PC's are lying.  He/She alters the deal, and refuses to pay more.

1.  Find a matching item (whether it was an original quest, or a new one)
2.  Delay a merchant caravan
3.  Discover a lost tribe/monster
4.  Re populate a dungeon with monsters
5.  Destroy a local tavern
6.  Find a lost warrior

Note:  For some majorly stupid reason, I originally stated the Vader was talking to Boba, the internets have pointed out that I am in fact a moron.  I do not intend to share this post with my Star Wars loving Wife for fear of the spanking that I may in fact receive.  As well when I was first thinking about this, I had the robot chicken version of "Altering the deal" in my head.  Which includes Lando.  Had I actually watched the above video, I may have caught my mistake.  Next time MORE COFFEE!

Posted by shanepatrickward at 8:03 AM