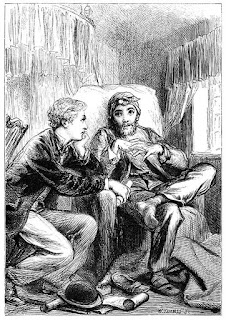 Anytime you have a player make a Charisma check (during a conversation with an NPC) and they fail miserably, you can consult this d10 table for some random silliness.

In our game we call Charisma checks, "swagger" checks.  Normally every conversation starts off like this... "I walk up like Matthew Mcconaughey".

1.  The NPC is now under the impression that the player finds them attractive.

2.  The NPC is going to tell this epic fail story to their grand children.

3.  The NPC immediately attacks, they have had enough of this!

4.  The NPC clearly speaks a different language, and has no way of comprehending the PC.

5.  The NPC suggest that you might look elsewhere for a deal/quest.

6.  The NPC thinks that the player was relaying a good recipe for chicken soup, get's excited!
7.  The NPC decides to just walk away.

8.  Turns out the NPC is mentally unstable.

9.  The NPC misunderstands, thinks the PC's would like to marry the NPC's daughter/son.

10.  The NPC is outright upset by any demands made by the PC.  He/She throws a hissy fit in the street, complete with kicking and pounding on the ground like a toddler.


Posted by shanepatrickward at 11:27 AM