It's January of a new year.  This means a new beginning!  It's time to get working on things.  I know the hallowed halls of the 3 Toadstools pub & eatery have been awfully quiet.  I apologize patrons, It's been a bit of a thing.  I lost my mojo for gaming for awhile and wallowed in the muck of this forever pan.... you know what we are not going to talk about that are we!  What we are going to talk about is that I decided to redo the gygax challenge created by Mr. Ray Otus Plundergrounds • A podcast on Anchor

Ray set this all on fire a few years ago (maybe last year? no one is counting at this point).  If you would like to participate again go here: The Gygax 75 Challenge by Ray Otus (itch.io)

So without further ado, I restarted and this is what I've got.

*the dree (druids) have seen dark omens. They fear the return of the horde.*the people of straybal are celtic\viking albeit more civilized. Each hold is ruled individually. They follow ancient traditions*magic is light and dark. Light (clerics) is nature influenced. Practiced by druids or dree. Dark is elemental practiced by sorcerers who are shunned.*years ago the people of straybal fought off the hordes. There remains a guard tower near the river always watching. It is forbidden to cross it.*no elves, dwarves or halflings…they died out years ago and are mostly fairy tales now.*grimdark setting, low magic. People eek out a living in the harsh climate. 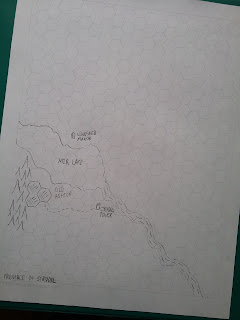 I have a few plans for the map, still working thru the details.  I haven't decided if I'm going to complete it yet.  I may work on it as the adventures progress.  I would like to put a mountain range and a valley to the north of the manor.  I need at least one other small settlement as well.
The Inspiration
Having just finished the Witcher season 2, this whole thing is very much in that vein.  I went ahead and created a mood board on pinterest here: Pinterest

My hope is to have this basically a Celtic society living in the northern reaches, they are a weee bit more civilized than vikings.  Although they still keep to the old ways as far as gods are concerned. 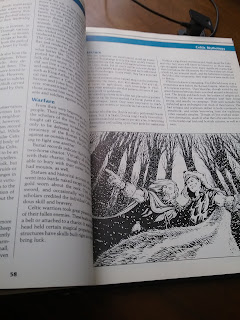 My hope is to complete the challenge and start running it by the end of Feb.  I will likely post a few more details about this whole process as the month progresses.   I know this is a little bit all over the place writing wise, but I think it will be fun!
Long story short the idea is to be very grimdark, northern slightly civilized society dealing with Celtic monsters, folklore and religion.  I will likely throw a bit of He-Man in there for good measure.

Posted by shanepatrickward at 12:45 PM