I’ve got something that you don’t have. And it’s going to boggle your mind!

I’ve got a friggin copy of Pyramid of the Lost King: Adventures in Basq! 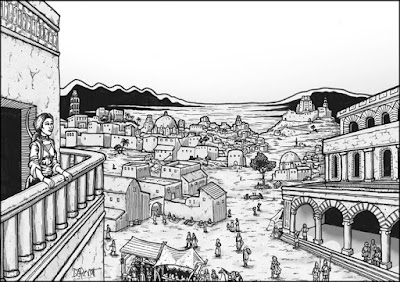 This morning I got a message from Johua De Santo of Genius Loci Games, there was a download link.

I’m currently in my glory reading the manuscript.  And I have to say, just with a cursory look, this is going to be epic!  Well worth the wait.

While talking with Johua, I said to him “If you were sent thru time and space and found yourself in Basq, what song would be playing on your ipod?”.

His response “Genesis version of Land of Confusion”


Which got me to thinking, what would I be listening to?

Here’s the thing!  If you want information on what’s going on with Basq, I’m the only source!  Yes 3 Toadstools has been named the “Exclusive Blog” for all updates regarding this project!

Description:
Pyramid of the Lost King is the newest Lands of Usarm adventure from Genius Loci Games. Pyramid takes place in the deserts far to the south of the Ruined City of Uostin where the merchant guilds of Neark are trying to open trade with the elvish forest kings of the Last Land. However, between the Lands of Usarm and the Last Lands stands the Saragubi Desert, A wild and unexplored place that offers adventurers a chance at fortune, fame, and of course certain death.

Pyramid of the Lost King is a decentralized sandbox adventure centering around an area of the Desert known as the Narrows. The Narrows is a section of desert that is divided into a northern and southern half by a massive slab of sandstone over 200 miles wide and 300 feet in height. The only way (aside from walking around) past this slab of rock is through the narrow canyon the area gets its name form. The Narrows and the desert around it have become a hot bed of activity as the merchant guilds have come to rely on it for their caravans to the Last Lands. However, the desert around the Narrows is still unexplored and dangers, both ancient and new, encroach.
So after reading that, what song would be playing on your device if you found yourself in basq?

Whilst doing some google fu, I stumbled upon this episode of Gamepunting, in which they discuss the Pyramid Of The Lost King.  http://csicon.fm/gp54/