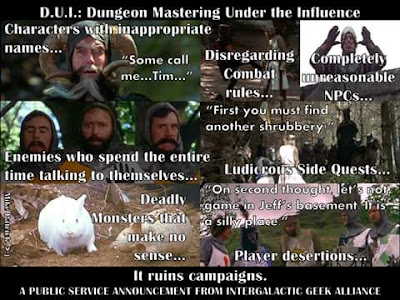 Managed to remember to bring my notes this morning for the session.  While its probably a really dumb idea to drink & DM, I do that.  The funny thing is that this campaign is entirely made up off the top of my head.  So you know having a few beers isn't always the smartest idea for remembering things!  However I've been quite good with diligently writing down what happens during the sessions.  As a side note the next character I play in our 5e session, is probably going to be the typical quite thirsty dwarf warrior dude.

Alright onto the session!  As I stated the PC's pretty much finished up the tomb of gardag the strange.  I'm really happy with the way the adventure turned out!

Interesting note, the PC's of course went the complete opposite direction for most of the adventure and landed in the actual tomb basically at the end of the adventure.  I find that quite funny actually.  During the combat with Gardag, the thief Finkilidator Marcosiade the 5th (est) was first in the order, and decided to delay his turn and then shout "ACTION ROLL!"  I made him make a DEX check as he did a running tumble, stab the guy kinda thing.  The funniest bit of the whole encounter was the look on the players faces when they rolled a 19 and I said "nope your weapon does not hurt him!".  Bronsebane the dwarf acquired a pair of giant gauntlets and proceeded to beat the snot out of wraith with his bare hands!  I am going to have to figure out something BIG to send after him, as he is becoming the tank in the group.  Despite the fact that we have a former arena gladiator named "TINK!" who is all brawn and no brains.

Within the gardag's trinket room, the players found everything noted in the previous entry, and the a few interesting books. (of which I made up off the top of my head).

One of which is a detailed account of Finkilidator Marcosiade the POINT FIVE.  Finkilidator Marcosiade the 5th (est) looked at me astonished!  And now I'll have to write up some backstory for that.  As the "estimated" part has been quite hilarious.  The funny thing is its still probably going to be estimated by the time I'm finished  writing it.  (Side note, if and when I release this hex crawl, Fink and the rest of the characters are going to be pre gens in the back of the book, because they are all too funny not to leave out!)

The other books were the following:  A Botany Book, A Dissertation On Smells (hilarious!).

A little plot twist I threw in.  Within the room is a woman encased in wax.  I had the players make a wisdom check and they remember the story of the "Wrenwold Family" and the fact that they had one quite pretty daughter.  Turns out this was her.   The Wrenwold family is a group of wizards that ruled a village nearby (coincidentally that's going to be Brymassen ) years ago.  It's a lead up to the Zombraire Estate adventure as found in the adventure anthology at basicfantasy.org

Another relatively funny note was when Gardag got a hold of TINK! and started choking him, draining his constitution.   TINK yelled after his round "BAD TOUCH!!!! BAD TOUCH!"  Being not quite smart, but smart enough to let the other players know about it.  (I decided against level drain, opting for CON drain).

All in all hilarious as per usual.