A few weeks ago we gathered everyone together for another Old School session.  Unbeknownst to the other players in the game, Kurt and I decided to "flip the script".   He took me aside in the previous session and said "I think I've got a dungeon ready to go, but don't let the other players know, we will just switch at the table".

So here's the introduction, the players gather around the table, they are in the small town of Brymassen (hobbit village).  In the morning they get out of their beds and stretch and go outside for some fresh air.

Across the street there's a bit of a commotion in front of the church.  In some stocks is a thief.  The players go and talk with her, and with the priest.  (my wife's previous character was just not cutting it for her, so we did a switcheroo, she was a cleric of the church).  The thief in the stocks is set free, the PC's pay her bounty.  Enter my wife's new character.  Then the abbot talks to the PC's about needing some help from one of the PC's.  My wife's old player agrees to help the church out.  In return the church loans a new cleric. (ME!).

The players decide to FINALLY make their way to Elerd's keep.

Kurt's character FINK has went off to do some piracy with a NPC.  I made a decision that anytime a player was able to level up they would need to find a trainer.  He did just that, Harmona (who's grandfather was the dude that killed Gardgag).

I get up from behind the DM screen and switch places with Kurt. 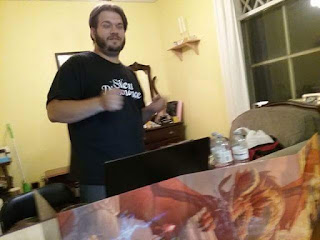 So now I'm playing this new peon cleric who is basically a moron.  Like dumber than "tink" the ex gladiator.  I rolled 3D6 and the dice gods were not kind.

My wife instead of being a cleric, she is now the thief that we freed.  (Pardon that I don't quite remember names of the new characters).

Onward to Elerd's Keep!  Our players bugger off from Brymassen and start walking towards the keep.  All of a sudden out of nowhere a mist of sorts surrounds us and we end up in a few weird forest dungeon.

Now, here's a interesting thing.  All of the "rooms" were planned as a "Left or Right".  eventually leading to the same goal.  I looked at the map after the fact. Kurt planned a bunch of interesting encounters, with some neat props!

The first thing we encounter is this crazy madman sitting in the centre of grove.  The DM proceeds to scream in gibberish, this weird thing he memorized.  It was frantic to say the least.  He didn't breath yelling all this stuff.

We decided to mercy kill the old man, since he was acting crazy crazy.

We proceeded off to the left I believe, and ran into a Raven sitting on a writing desk.  He kept asking "why is a raven like a writing desk".  As it stands I don't believe there is a correct answer for this?

I did however ask him specifically "where the tea party with the rabbit was?"

That was enough to have us move on to another grove.

We fought a few baddies in the next couple of rooms.  With my low wisdom I decided, I'm going to go into a different room.  So 3 of us went one way the other 2 went another way.

I should note that the adventure was called "don't split the party".

2 of the players ran into a room with a crazy Zelda puzzle.  Which took quite a long time to figure out.  (see picture) 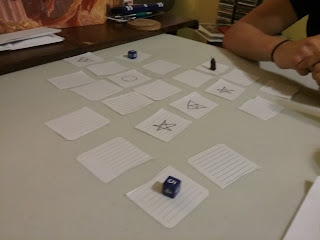 We went into a room and were given 3 bottles, actual real bottles with food coloring.  One was a poison, one was water, and the other was a healing potion, however they all looked the same.

NOTE:  One had gin, one had tequila, and one had water.  They all had food colouring and were all red, and had the same amount of booze/water in each.

Another room we ran into there was a torch bearing scary skeleton guy, to which we got flashed with an extremely bright light.

Still split, we end up in a room with a pile of other skeletons, the other 2 players with me were pretty beaten up.  I had been somewhat smart enough to grab a flask of oil.  So in a moment of kamikaze brilliance, I lit the oil a flame, stuck it in my belt and made a run for the skeletons.  BA BANG!

And somehow I managed to not die! even after loosing almost all my hit points, and a succeeding on a saving throw!  I'm going to go with my character now being a eunuch!

Note: This blog will be a 2 parter.  At home I have notes from the rest of session, and for the life of me I can't remember anything.  Hence the notes :P

I built a handy little link that has all of the session reports thus far.