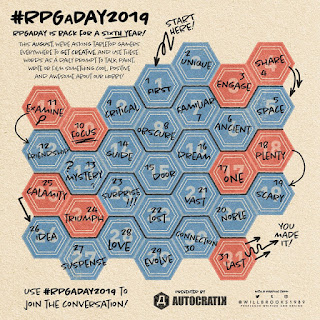 I've done the rpgaday thing a few times over the past years.  Once or twice it's been the daily posts, and other times I did a one shot.  This is a one shot.  What I've decided is to read the word and then just write whatever comes to me (whilst thinking about rpgs).  My guess is that is what some people do.

So here goes nothing!

I find that whoever goes first in combat will set the pace for the rest of the melee.  I tend to be over the top when playing (swooshes, dancing, twirling etc).  Typically I'll do my best to make fun of the bad guys as well.  When I DM and the monster gets to go first, I will usually try some kind of tactic, (throw the table over and fire ranged weapons) that sort of thing.

I really like Unique settings, even if they are small.  There's quite a lot of vanilla fantasy out there (Don't get me wrong, I like that as well).  But the idea of having a small contained off the wall setting really excites me.  One of the adventure settings I wrote was based on the fact that the world was self contained within the hexes, and the borders (off the page) were the "fairy mists".  Which I believe I stole directly from Terry Brooks Magic Kingdom for sale.  It's an obvious cop out that the players can't get past the first area map.  It does however explain why the place is magical.

I've mentioned this before.  When I DM (especially for my long term group), I like to find out what players get excited about.  My wife likes puzzles and awkward situations, my nephew likes role playing and our friend likes fights.  When we are playing I tend to look around the table and see whose not looking at me.  That's the person the NPC picks to talk to.  So I do my best to figure out ways to keep people engaged.  Part of that is knowing what your players like/dislike.

Part of what I've done on this blog and social media is to share things that I like.  That and share things that people might not know about.  Specifically more obscure writers & projects.  The bigger the share, the more things get out there so people can read it, play it etc.   I fell in love with Blueholme when I first started this blog, and I've desperately tried to make sure that its out there so people are aware of it.  Written classes, adventures etc for it.  It's a solid system, and I didn't want it to go by the wayside when the next big clone arrived.

I finally have a pseudo gaming space.  In the spring I started to finally clean up the basement, and now I've got it setup so that I can have the gaming group down here, with a table for them.  I need to get a few extra chairs.  We do have a beer fridge though!  Whatever world I end up using, I intend to stick the maps on the walls.  Currently there's a bunch of D&D type posters on one wall.  Also its damp and feels like a dungeon down here.  Oh and I have my computer setup, which will make it very easy to DM.  Now to create a play list.

For my next campaign, or possibly the isle of dread campaign I intend to create an ancient artifact using the 1e DMG.  There's a huge section dedicated to that.  And to tell you the truth, a lot of the artifacts in there are already pretty cool.

I started with 2nd Edition.  That being said, I've read a pile of different older school clones, and I love every one of them.  My version of D&D is the familiar one that's in my head.  It's a basic set of rules that I really don't need an actual rule book for.

Frick these are hard.

Alright that's a good one.  I really dig the crit charts in the free rpg day release of DCC.  At some point I want to incorporate them into my S&W game.  Although I may have to rewrite the tables (If I remember correctly they are like d30 tables).

Focus, is basically the bane of existence for anyone with Attention deficit disorder.  Something that I desperately need to work on, something that I am always fighting.  Moving forward, I intend to write as far as I can with projects.  If i get it near complete, great!  If I get 2 pages, that's fine.  But what I need to do is push as far as I can.  Eventually go back and complete these things.

I am having a super difficult time trying to follow this hexmap.  Would it not have been easier to somehow go right to left?  I got nothing for examine really, other than to say I like to examine adventures, books, etc for ideas.   Even if I don't outright run a module as is, or a set of rules as is, there's always some gold to use.

If it wasn't for my rediscovery of ttrpgs, I would not have met some many awesome people.  I love all you peeps!

Mystery is something that is sorely lacking in the adventures I write.  I have however pulled inspiration from "Assassins Knot", which is a great adventure.  The original blue baron was supposed to be a who dun it.  Mystery in D&D is not an easy thing to make work.  Mystery in CoC is basically the name of the game.

Meeka is the guide I created for my isle of dread campaign, here's the gist:

Meeka is a young girl, and the welcoming party when the PCs arrive.  She will know the going's on, and any possible leads for the PCs (as well as Ramses's).  She will remain neutral, however if the PCS threaten the village in someway she will not hesitate to let the authorities know.  Namely Gar.  Meeka is also a guide, and knows a great deal about the area.

A long time ago, there was a facebook group called FY DIY.  (Fuck yeah Do it yourself).  We did a few collaborative releases.  One of them was "clues that a secret door is nearby".  I did the layout for that one.  Here's the download:
https://drive.google.com/open?id=0B-hlnlR7qn5XNThLNkstaUQ4UU12dHNhYUJrM2ZRZkxweTFF

Oh so fucking many.  Most of them revolve around actually creating an adventure that is completely DIY by myself.  Including terrible shane art.

i suppose "one" is the bane of players existence when rolling a 20 sided dice.  That being said it's also a great song by Metallica.

I tend to do the monty haul type campaigns.  Part of the reason I do this, is player enjoyment.  It sucks bag when you fight your way thru a huge dungeon, only to come out with 3 SPs and a disease you need cured.

It's got to the point where I do not find Demons that scary in D&D.  Maybe I just don't play them right (when I DM).  What i think is going to be awesome is, when I finally run menzoberranzan.  Considering all of my players hate spiders in real life.  It almost makes me want to switch now.

The blue baron was always supposed to be this eccentric weirdo.  Obviously a Noble.  But in a group of another nobles he's stick out like a sore blue thumb.  It's not that you fear the guy, you just have no idea how he will react.

Deserts are vast.  (I hope I spelt that correctly..... is it desserts? no its not.... I could go for some chocolate cake however).  At some point I want to run a few one shot Al Qadim adventures.  Specifically this.

I had the original advanced fighting fantasy books.  Well other than Allansia.  I recently required Blacksand.  I lost Dungeoneer, Out Of The Pit, Titan and Blackssand when my parents got divorced.  The hunt continues for reasonably priced versions (seriously the prices are thru the roof right now).

When I was a kid, I never used Surprise, Morale or Reaction checks.  These days I have all the players roll 1d6, on a roll of 1-2 they are surprised.

Super cool motorcycles, although I'd prefer a Royal Enfield.  Obviously the whole Triumph over evil thing.  I tend to run campaigns where the heroes are the good guys.

I'm running out of steam here.  Here's the definition:
an event causing great and often sudden damage or distress; a disaster.
Which is basically most spells isn't it?

When Calamity is cast, the mind of the target is taken over with thoughts of death.  Explosions happen in front of them, their friends die horrible deaths, the flight or fight response kicks in.  The monster must make a saving throw or flee in terror.

You know who is an idea's person, Matt Jackson.  He comes up with the awesomist shit.  Check out his patreon here:  https://www.patreon.com/msjackson

See my comments on mystery.  This is something I need to work on.  Specifically writing wise.  ie I should read more books.

My wife plays D&D with me, because "I love it".  I really need to start doing things that she loves.  At some point I may take a dancing class with her, or cooking.  In the meantime I should probably get a game happening soon.  This weekend however is our anniversary, so we will be spending the night in a hotel drinking champagne.  I'm stoked

This blog has evolved.  It is still a LOT of rambling, but in some cases I've got better at dialling down to the thing I want to talk about.  I just recently posted my 1000th post.  Here's my first one.

If I had to run one last campaign, it would be a huge mega dungeon with a cast of rotating players and characters.  A living thing, that changes with or without the players involvement.

Posted by shanepatrickward at 8:21 AM

Email ThisBlogThis!Share to TwitterShare to FacebookShare to Pinterest
Labels: #rpgaday2019, one shot