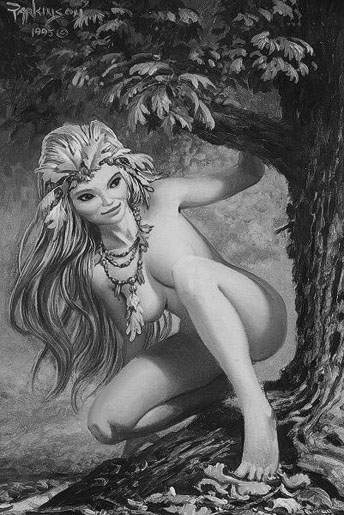 Skill 9
Stamina 15
Magic 10
Weapon: Claws (As sword)
Armor: Medium Monster
Special: If successful hit, will drain one point of Skill from PC
Intelligence: High
In folklore traced back to medieval legend, a succubus is a female demon or supernatural entity that appears in dreams, who takes the form of a human woman in order to seduce men, usually through sexual intercourse. The male counterpart is the incubus. Religious traditions hold that repeated intercourse with a succubus may result in the deterioration of health or even death.
In modern fictional representations, a succubus may or may not appear in dreams and is often depicted as a highly attractive seductress or enchantress; whereas, in the past, succubi were generally depicted as frightening and demonic.
A Death Succubus could be considered a Demonic Nymph.  These creatures are very rare, and come from different planes of existence.  They normally prey on single wandering adventurers.  If encountered a Hero must save vs skill at -2 every other round, or fall into a deep trance (lasting until she kills you!).  Death Succubus can be found in any region of the world.  There common goal is to mate with humans and demi-humans creating demonic offspring.