What's with the dragons? - A brief explanation of OGL

A friend of mine just asked me lately "What's with the dragons?".  Meaning what the hell is my fascination with all things D&D and RPG related.  The following is my answer....

Here's the long and short of it.  Back in 1979 the Dungeons & Dragons game was created. Since then its gone thru 4 revisions, and they are now releasing the 5th version.  In the past few years, the company that owns the trademark on the mechanics of the game, "Wizards Of The Coast" has released a document called "OGL" or open gaming license.  Which allows independent publishers to take the mechanics of the original game (Basic to 3rd edition) and create new rule sets and adventure modules with the OGL.   The great thing about that is that publishers can sell these products.  There is a growing movement to go back to the original game, because the later editions just didn't cut it for the old school types.

And since there are a ton of gronards out there that refuse to play any newer versions of the game, there is a huge public outcry for systems/adventures based on that original rule set.  They call these rules "Retro Clones".  The one cool thing about this is people nowadays can recreate these rules and they are easier to read, find things etc.  It has also created a need for graphic designers, editors, map makers, etc.  All in all its friggin fun!

Posted by shanepatrickward at 8:43 AM No comments:

No one likes a prequel do they? I need an honest opinion here.  I have an idea for a prequel adventure to my big module, I sorta plan to use it as the bait on the hook for people to buy the bigger module.  I'm not sure how the RPG community feels about this, so I'm very curious at this point.  My plan so far is to finish up this adventure, offer it up for free, and eventually I will included the prequel in the big paid module, so that people don't feel they got shafted, etc.


Posted by shanepatrickward at 2:32 PM No comments:

Spent some time recording voice overs with one hand this morning and... 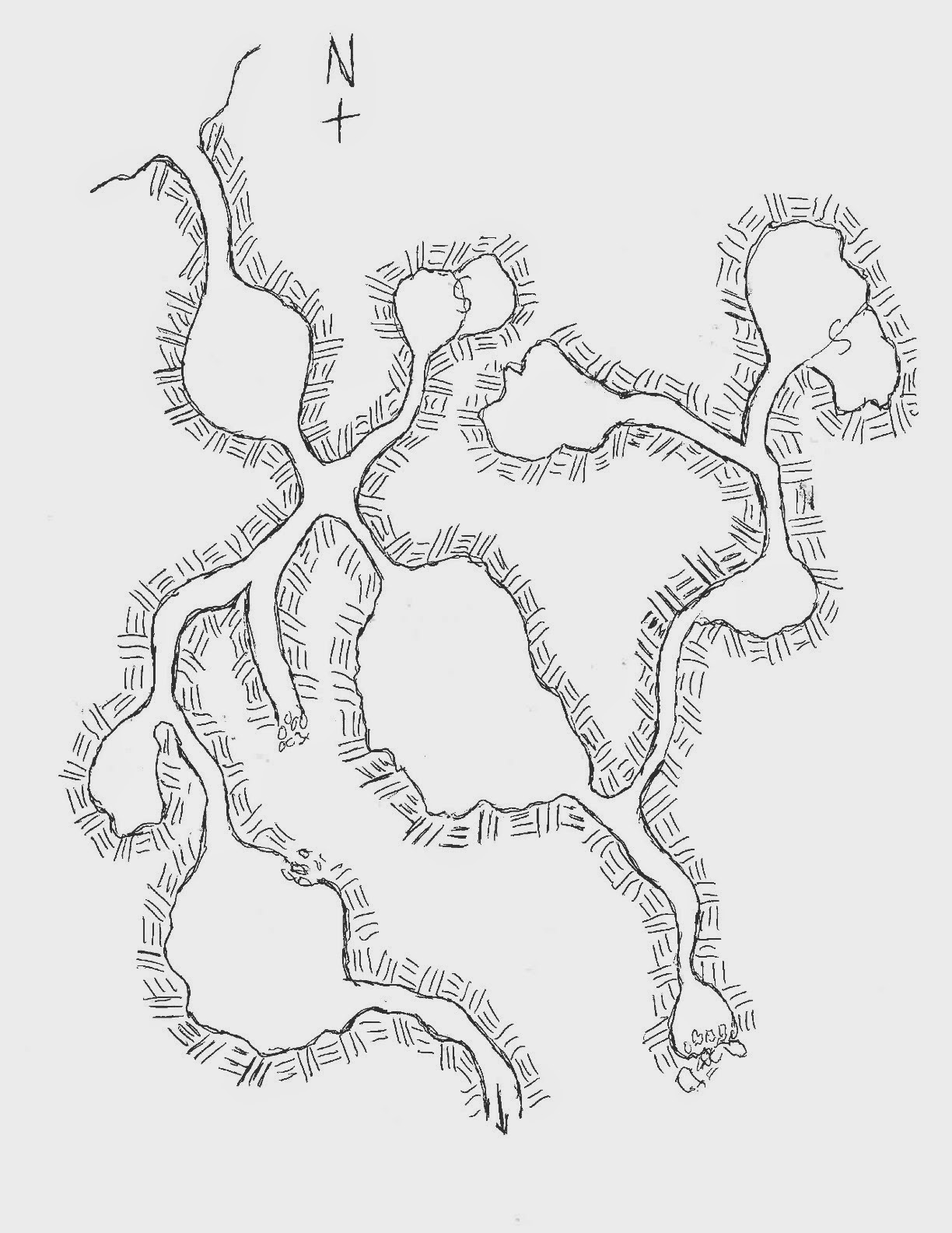 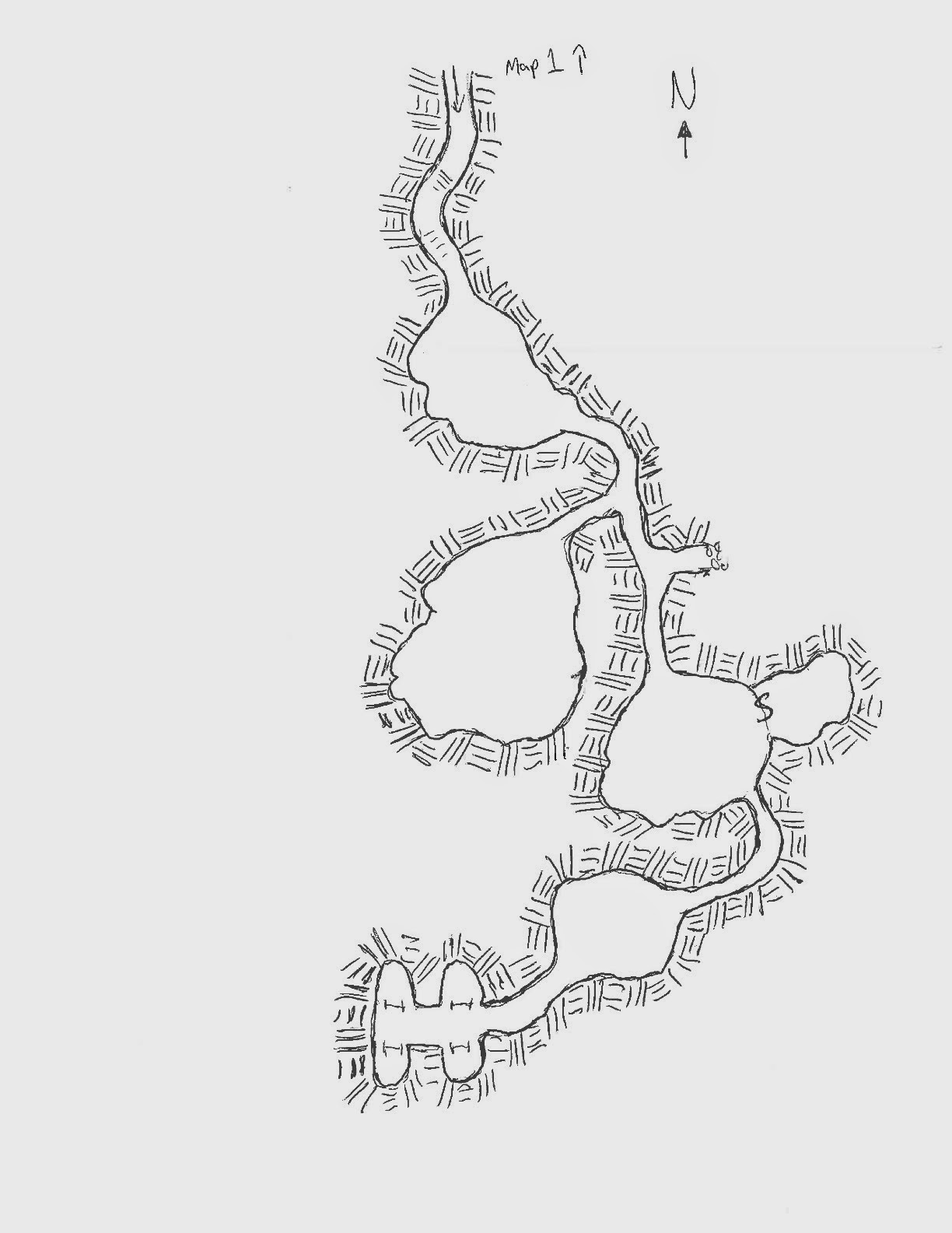 Drawing with the other hand.  These maps are starting to look better.  and unfortunately, they gave me an idea for an adventure as well.
Posted by shanepatrickward at 11:16 AM No comments:

I decided I think I'm pretty much going to run this module.  Its been stuck in my head since I've read it.  The included map is alright, however it might be a pain in the arse to run as is, you have to use a ruler to decide how far the PC's can travel etc.  1 inch equals ex amount of miles.  What I think I may do is just re-create the map on a hex crawl, that will make it easier to key encounters, etc.  Also I think I'll convert the whole friggin thing to Basic Fantasy as well.
Posted by shanepatrickward at 6:16 AM No comments:

Okie dokie, since everyone else has put there 2cents in regarding 5e, I might as well say why it is I'm not buying it.  Money! hahaha.  granted I'll dload the basic free version just to have a look around and see exactly what it is I'm missing.  The real reason why I'm not buying it, is there are all sorts of other things I'd rather buy (RPG related).  I'd like to grab "Out Of The Pit", "Blacksand" and "Titan" for Advanced Fighting Fantasy.  I would also like to grab B/X D&D off drivethrurpg, (and a few old school modules) and Mutant Future.  I am still toying with the idea of going down to a printer and printing off LL, S&W and or buying them from Lulu in hardcover.  On top of a bunch of modules I'd love to get my hands on, like +Venger Satanis Purple Islands Hex Crawl (it has a cooler name than that),  +Johua De Santo modules - http://geniuslocigames.blogspot.ca/  .Barrowmaze, I've also had my eye on a few older D&D books including a copy of the Holmes rules at my local game shop.  So basically I'm spent! hahaha.

TOTAL SIDE NOTE - The cover's are fucking bad assed for 5e.

Posted by shanepatrickward at 2:50 PM 2 comments:

I've had this module sitting in my collection for a long time.  I got it when I was a kid and the whole thing was a little over my head.  However now that I have a bit more respect and experience with the game, I finally sat down and read thru it.

First things first, this is the 2nd module in a series, I did not get a copy of the first one.  The bonus is they write in how to either continue the adventure or start from this adventure, so you really don't have to play the first one to play this one.

Because this is a dragonlance module, there are a lot of creatures and the world in general are very specific to dragonlance, it would be helpful to have some of the Monster Manuals, or Dragonlance setting to reference, although its not totally needed.  Thankfully I have wikipedia at my disposal to double check some stuff.

The one thing I really enjoyed about this module is that its all about role playing, there are a lot of opportunities for it within the text.  The beginning however would be a lot of DM talk till something happens, so depending on how your players do you may have to move that along a bit.  The whole thing is basically a map crawl, using 1 inch measurements basically.  Some of it was a bit confusing for me.  If I was going to run this I would almost convert the whole thing to a actual hex crawl with a new map.

What I liked best about this was the "Phases of the moons" part of the adventure, basically everyday you need to check the phases against a chart, and there are benefits or disadvantages depending on how the moons align for the PC's.  Kinda neat.

Another thing that is detailed quite well is the inordinate amount of little towns within the map, (not the features of the town themselves) but what happens when the PC's get there.  They can get arrested in each town, and there is a random table of possible events for each place.

Another note this is a deadly adventure! total TPK if you don't have some either high level PC"s or experienced players.  The pre generated characters are levels 5 to 8, but If I ran this, I would probably start everyone around 8th level, just for the sake of argument.

Of course the whole thing ends in a cliffhanger, so that's fun.  I think I'll be grabbing atleast the 3rd module when I get some time.

All in all not a bad module, but I highly doubt I'll run it.  I did however pull lots of great ideas for my own campaigns and module designs.  So good stuff.

Here is a list of all the Dragonlance Modules & Sourcebooks
http://en.wikipedia.org/wiki/List_of_Dragonlance_modules_and_sourcebooks

And here is the whole series

Posted by shanepatrickward at 6:15 AM No comments: