One of the first things I do when I get a new RPG system is to start creating characters.  This all stems from the first time that I opened the 2nd Ed PHB on Christmas morning.  Thankfully I had some dice I could use.

Interesting thing about character building, is that as you go you start to slowly create a background in your head.  Which then becomes some world building.  What might be an interesting idea to try, is to start working thru all of the character classes, (possibly on this blog) and create some pregens.  See if a story and world evolve.

Since I started thinking about 2nd edition again, I've been comparing it with Basic, and Fifth Edition.  That maybe another post.  I do have to admit that when I played 2e I pretty much ran it like basic D&D at the time (and probably still will!).  As far as Fifth goes, whilst I appreciate the backgrounds in the PHB, I think you (and I) will find that you can start making assumptions about backgrounds as you create a character.

So without further ado, I'm going to create a character.  3d6 in order as Mr. Gygax intended.

Alright, at first glance I think quite a lot of Classes are open to me other than any kind of Fighter.  Let's see how this goes.  First up, what race? It appears that I cannot be a Dwarf or a Hafling (Racial ability requirements chart).

Hmm, how about a Gnome! So Gnomes can be a Fighter, Thief, Illusionist or a cleric.  They get a +1 to their INT Score and a -1 to their WIS.

This guy would make a good thief or a cleric!  And possibly at some point he could dual class.  For the sake of argument however, this gnome is going to be a 1st level dude.

Name..... Galdrick Tipsyrose.  That sounds like a Gnomish name.  Since I feel like delving into some spells, Galdrick is going to be a cleric. 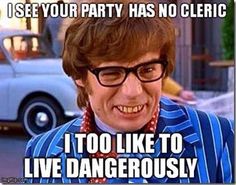 Just rolled some hit points, he got 2.  He may not be a long lived cleric.  And unfortunately there is no adjustment for hit points as per CON.

Backstory, Galdrick learned his skills from a priest in the small gnomish village of Hearthton.  The village is on the borders of a great forest, part of it is underground and part of it is located on top of a large hill.  War has not touched Hearthton, for the most part its a quiet place.  The gnomes go about their typical mining/smelting business.  On occasion they trade with the local elves for food stuffs and gems which they covet.  The roll of Nature plays a big part in the Gnomes of Hearthton's lives.  Their success is based on the weather, and the continued strength of the mines walls.  For prayer they turn to AH-KA, Lord of Nature and patron to the Gnomes.  Growing up Gladrick learned a lot from the local priesthood about AH-KA and his wonders.  He grew up in a fairly well to do family, and no evil or tragedy struck them over the years.  As are some Gnomes, Galdrick is quite inquisitive about the world around him.  Deciding to forgo his inheritance and the quiet life of Hearthton, he has ventured out into the human's world to see what he can see, protect nature when he can, obey it when needed and generally spread joy wherever he can.  I neglected to mention that Galdrick is also quite a decent harpist. 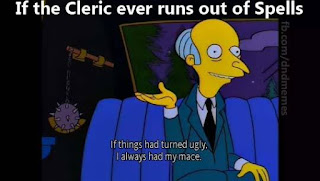 Weapon wise, in the PHB there is a discussion about the types of weapons allowed by certain gods.  In the case of AH-KA the weapons are Club, Scimitar, Sickle.  And I've already made my decision, a Gnome with a Scimitar is bad fucking assed (despite the fact that there's a certain dark elf who carries a pair).  Other than a sling, typical adventuring gear (backpack, lantern, rations, tent) Galdrick carries with him a small portable gnomish size harp.  He carries a few silver pieces to get by, the rest of his wealth has been left at the small church in Hearthton.

I've always had players roll on the secondary skills table, for the sake of having a bit more background information, at least as far as role playing is concerned.  I rolled 28:  Hunter - (basic wood lore, butchering, basic tracking).  Alright that makes some sense doesn't it?  I mean he's a gnome living on the edge of the forest.  Maybe instead of spending time in the mines, he was out hunting small game.  I'm almost positive that Galdrick makes a decent rabbit stew.

Clerics start off with 4 Non Weapon proficiencies. Of which they can pick from the general ones, or the priest ones.  I tend to take a look at the class specific profs first.  Viola!  Musical instrument, herbalism (which only stands to reason as he's out and about in the forests hunting game etc).

Alright 2 more to go, let's check the general ones.  Direction sense seems plausible to me.  Everything else is a little boring.  Back  to priest ones.  Hmm local history! Well that makes some sense!  So off he goes with his knowledge.  Maybe there's a small human settlement close by.  If he winds up meeting some fellow adventurers and they want to try their hand at venturing into the darker woods north of the Gnomish village, Galdricks knowledge should come in handy! 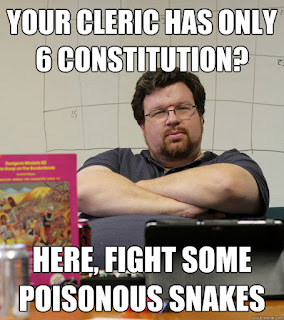 Okay spells.  (Fuck this is a long post.  thanks for sticking around! I'm almost done.  As you might be able to tell, I'm basically writing this as I create Galdrick).

Galdrick has a few spells, but is only allowed to cast one per day (and memorize from his God).  Here is the spell list that he has access to: Bless, Entangle Cure Light Wounds, Detect Magic, Light

There are certain spheres in 2e for Cleric spells.  Obviously you can disregard this if you like.  I've decided that Galdrick's god will allow him access to Animal, Elemental, Plant Sun, Weather, Healing spells.

Posted by shanepatrickward at 8:12 AM 4 comments:

(Caution:  As you may know dear reader, I ramble and most of my blog posts are just a stream of thoughts.  I tend to not edit posts)

Recently I've been rediscovering 2e and really enjoying it.  I'm feeling like a 15 year old again!  I blame Steve from Hogtown games for this, I just bought the City Of Greyhawk boxed set off of him.

I am thinking that I may start a bit of series of posts regarding this topic.  First up, my introduction to 2e.  My "writer" biography discusses it a bit.  Long story short, I started gaming with Advanced Fighting Fantasy, and had previously played a little bit of 1e with my cousin.  I slowly grew out of AFF and was looking for something a bit more intense.  At the same time my Mom was working at a bookstore.  I should also note, that the year that D&D was originally published, was right around the time that I was conceived.  So really, 2nd edition was my first edition.  For Christmas in 1993 I received the PHB & the DMG.  Shortly thereafter I got a copy of the Monstrous Manual.  In all honesty that's all I've ever needed.  I never got into the splat books, skills & powers etc.  So when I run 2e it's the core three books only.

My second edition collection is as follows:


Recent acquisitions are:  The greyhawk boxed set, and Legends and lore.

Here's a few posts about 2e.

I have to say everytime I crack one of those books, my head fills with ideas.  The Ten Monster setting idea came about because I picked up my monstrous manual.  Before I even had a campaign setting, I started writing ideas out, and it was the usual start with a small town, dungeon close by, etc.

Hopefully this was a decent introduction.


Posted by shanepatrickward at 10:06 AM 4 comments:

It's amazing how the isle just moves along organically.  What I mean by that is with a few random dice rolls and some player enthusiasm the world becomes it's own thing.

We started off right where we left off, right by the gates to the Isle beyond the village.  Meeka was in the middle of telling the PCs about their ancestors and the large black pearl worth way too much gold.  All of a sudden there was a shout from the wall, one of the soldiers spotted something coming. Loud noises, thumps, wacks and brush being disturbed, out of nowhere came a charging Titanothere. It charged into the gate, slamming it with so much force. 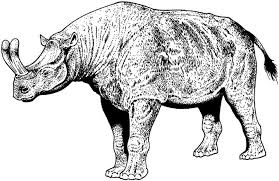 The PCs quickly started to help, they jumped up on the wall and started firing arrows and spears with the villagers.  One PC was thrown over the wall and landed on the back of the charging beast.  He threw a fireball at its back, severely wounding it.  After a few rounds it ran off, carrying the Wizard on its back.  Thankfully he managed to fall off, taking some minor damage.  It tromped off into the bush.

The PCs asked a few more questions of Meeka and then moved on to getting a few supplies, including rations.  They found out that it had been years since the Villagers had seen a titanothere.  They have heard rumours of pirates raiding the southern villages, and that they have had some trouble with neandrathals and Aranea (smart giant spiders) attempting to attack the village.

Note:  Most of the players are deathly afraid of spiders.  Cue more spiders.

The next morning they set off with meeka to the tar pits.  As they walked the jungles and swamp started to feel a bit close, as if the growth was closing in on them.  Creepy sounds, insects buzzing, and the heat bore down on them.  As they walked they noticed off the road a bit was a shiny metal object.  Upon closer inspection, it was a very out of place bronze crowbar.  There was nothing around it, no bones, footprints etc.  Cautiously they checked if it was magical.  It was not.  They decided to keep it.

Almost a day and half out, they were met by some lizardmen in the road.  "PAY TOLL OR DIE!"  they shouted.  The PCs chose death.

Well not really, they fought valiantly.  The lizardmen fell one after the other, until only one was standing.  It decided to stand its ground and fight attempting to exact revenge for its fallen comrades.  It met the same fate as the others.

Close by, was the lizardmen camp.  In a chest the PCs found a huge pile of gold!  2000 GPs! and a few gems worth quite a lot of money.

Hopefully they realize, that they do owe the Scarlett brotherhood half of whatever they find.

Maybe someone may come and check on them.  Hmmm

We ended the evening at the Tar Pits.  The PCs will level up next time.

I've decided rather than worry about XP, I'm just going to level them up every few sessions.  Although it will stretch a bit further every time.  The first few sessions have been mostly role playing and this time it was all combat.  Which was great.  So techincally 4 sessions to level up.  Next time I may push it to 6 or so. I'll see how it goes.

Posted by shanepatrickward at 8:46 PM 4 comments: