I've been going on a bit of a tear reading graphic novels latetly.  The local library has a HUGE selection.  For a long time I thought "Hey I should collect graphic novels", but I've realized that I read them once and that's it.  Which seems counterproductive moneywise.  Other than old school GI JOE and a few other choice selections I've managed to steady my hand.

But I digress, I've been on a batman kick latetly.  There have been a LOT of writers on the batman comics over the years.   The 2 books I grabbed from the library are:

Which is basically a throwback to the Adam west TV show, it's fucking great! 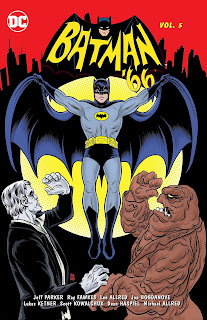 While I prefer old school detective batman the most, i do like basically all iterations of the batman.  I have found memories of going to see the Keaton movie, and the later ones.
*note there is a Batman 89' which I desperately need to read at some point.
The other book I got from the library is the Scott Snyder Court Of Owls (which I just went and placed holds on a bunch of other ones in that series).  It's pretty awesome, the batman in this is a bit Frank Miller and a bit different.
What i've come to realize is that the interesting thing about comics is that they grow and evolve.  Sometimes there are throwbacks, or different worlds, obviously different story lines.  The characters and the setting remains the same, but not always.  In some cases heroes become villains (and vice versa).
Which leads me to D&D.  For a long time I was an overprepper, and I did not want to ruin canon!  Seriously the whole idea of canon and "Playing it wrong" bothered me for a long time.  I'm going to chalk that up to having read Dragonlance when I was a kid, and the fact that I started out playing 2nd edition in the Forgotten Realms.  At that time FR had already been around for a long time, I had the campaign set and it was filled with all this interesting lore and adventure ideas.  The more I played the more I realized if this happened, what happens to X, etc.
Back to Batman and comics in general.  It doesn't matter if you break it, the next writer is going to come along and do something completely different.  They will resurrect the Batman in a new fucked up Gotham and the whole thing starts again.
So Greyhawk the new 52?  Sure.  What I need to remember, and what other DM's need to remember is THIS IS YOUR VERSION OF THE WORLD PRESENTED.  Go ahead and make Vecna a good guy, or completely kill him off, Let the elemental cults sweep over the world and have the PCs pickup the pieces.
I've been working on a saltmarsh campaign in 5e, and at first I was like "well there's no tieflings, and dragonborn in Greyhawk, how do I explain that?"  I explain it if a player wants to play one, that's how.  It's my version, who gives a rip.
There's a note about Granny Nightshade being in a forest near saltmarsh, yet she also appears as a big bad in witchlight.  Maybe she's there, and she's brought warduke with her.  And if I run witchlight, its back or forward in time with different characters.
Side note, here's an interesting thread about Granny in saltmarsh
https://www.reddit.com/r/DnD/comments/buib0x/granny_nightshade_spoilers_for_those_doing_ghosts/

A couple pieces of information in Gos chapter 1 that stood out to me were 2 separate portals to other planes which exist in the greater region surrounding Saltmarsh. There's the nexus to the Shadowfell at Granny Nightshade's castle, of course. But there's also a portal to the Abyss located in the Drowned Forest (GoS p 24).

What if some demon lord wants to use these two portals as a way to invade the Shadowfell? Basically, send a demonic army into the PM plane through the Drowned Forest and into the Shadowfell by way of Saltmarsh. Could this be the real reason why Captain Xendros (Faithful Quartermaster of Iuz, GoS p 14) is in Saltmarsh? Could she be looking for the Apparatus of Kwalish in order to be able to more safely traverse the Drowned Forest? Will the Players have to side with Granny Nightshade in order to stop this invasion?

via ShakeWeightMyDick
·3 yr. ago
WOW I'm behind eh?  Just go that book a few weeks ago.
Okay this has got slightly off topic.  But hey this is the 3 Toadstools and if you are a reader you know that is my typical MO right?   right!
A long time ago I wrote a thing about "What if Batman was a D&D Character"
http://3toadstools.blogspot.com/2014/01/if-batman-was-d-character.html

Posted by shanepatrickward at 6:46 AM No comments: