This year was a weird one. I didn't release much of anything as far as quantity is concerned. I spent a good six months working on the "return of the blue baron".  Which left me very tired.

I've slowly in the last few weeks regained a bit of inspiration. I wrote a barrow mound for Matt jackson, which was fun. I'm hoping to do at least one more.

I'm currently working on a layout project for d-oom products, which has been a lot of fun. Lay out work is right up my alley.

Now that I've finally figured out how to make a pod using lulu, I may try and revise (rewrite) all the three toadstools stuff. Time will tell on that.

Gaming wise, I intend to quit my 5e group, as the game is really not for me. Nothing against anyone in the group, I just don't like the mechanics.

I've been invited to a bunch of osr games online, and am hoping to get off my duff and play.

Dming wise, I got nothing at this point. I'd like to run blackmarsh with swords and wizardry white box at some point.

Writing wise, I just want to do more of it. Head down and write.

I've got a few half cooked ideas, that I'd like to finish and put up on the blog as downloads. My mutant future idea for one. The more I think about it, the more it's a "hey here's a thing", rather than a here's a paid for thing. If that makes sense?

There have been a few rumours flying about the demise of blogger.com if that happens I'll move somewhere else, no biggie.

Anyways, I know this is melancholy, but I hope to get a few things done this year.

Posted by shanepatrickward at 8:48 AM No comments:

While shows like "Critical Roll" and others are at the top of a lot of people's playlists, I figured I'd do a quick post on more OSR centric shows.

Thanks to everyone who commented on my post over at mewe.

Drunks & Dragons:  https://geeklyinc.com/category/drunks-and-dragons/
Drunks and Dragons is an award-winning actual-play, comedy podcast using Dungeons and Dragons as a framework for creating a (mostly) improvised narrative.

Drunks and Dragons has been releasing weekly since November of 2012, and has built a considerable fanbase for a completely independant podcast. As of December 2017, DnD has an estimated 70,000 unique monthly listeners world wide, and over 600,000 monthly downloads. DnD has even spawned an annual convention.

Red Dice Diaries: https://reddicediaries.com/osr/rose-of-westhaven-season-2/
For the second season of our Rose of Westhaven Midderlands campaign we decided to re-focus the game and settled on the idea of a group of church sponsored monster hunters. The game timeline has moved forward ten years, there is a new King on the throne and–against a resurgence of pagan cults and practices–the Church of Westhaven sponsors hunters to try and restore order to the Havenlands.

Jason Hobbs: https://www.youtube.com/channel/UCzcmLPbm3yPW7OxHMcIhPEA
Jason runs a online game called Kalmatta, including a international version with our favourite anchorite Mr. Colin Green. I'll have to double check with Jason on what system he runs.

Antonio Bravo: https://www.youtube.com/channel/UCubqY8gBVdp3Ps5HOJPy6EQ/videos
Just one session on this channel so far, but it's a great Lab Lord game!

Okumarts Games: https://www.youtube.com/channel/UCdFWQAMO01HMmhJqq_hvP5w
Super fun stuff, with lots of minis and great production.  Check it out.

Uncle Matts D&D Studio: https://www.youtube.com/channel/UCwQ6cSVDLklOoQ8VSMsxp5Q
If you haven't heard of Uncle Matt you maybe living under a rock.  He runs some old school swords & wizardry and 5e.  The heroes of Jordoba

If you have some fav's please post in the comments below.

Posted by shanepatrickward at 2:29 PM No comments:

I've been working on a layout project for a friend of mine (which I've talked about on and off the past few months).  The gist of which was "I can't figure scribus" etc.  I'm using openoffice for this, and it allows me to embed fonts properly.  Anyways, as I've been slowly procrastinating, this evening I'm going to get down to business!

Last week I wrote up a fairly deadly adventure for Matt Jackson's Barrow mounds.  You can get more info here: https://www.patreon.com/msjackson

After doing a quick proof on Matt's adventure, I was filled with inspiration.  So I started writing.  Which was nice, as I've been in a back and forth slump for a bit.  I have a few maps to draw, and one to redraw for it.  The premise is simple "go get rid of the bandits".

It'll probably be stated out with S&W I think.  Just for ease of use.

There was a few shane-isms in the first draft that I'm going to have to go and deal with.  But for a creative spurt I'm happy.

It probably won't up being any kinda release other than "here! here's a download, have fun".  Which IMHO I really enjoy doing.  Hopefully I'll get it done by Christmas.  First up though, is finishing out the layout project.  As it is 6x9 I've been looking for inspiration in RPG books.  I've settled on basically looking at anything lotfp I can get my hands on and B/X Essentials. 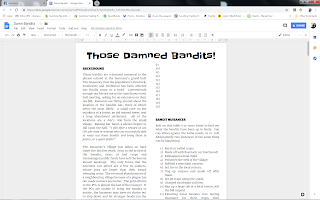 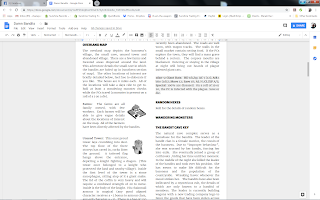 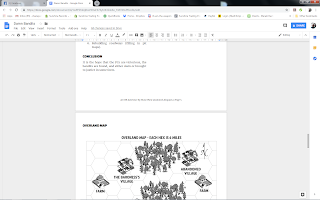 Posted by shanepatrickward at 2:38 PM No comments:

I nominated rotbb for the ennies

I decided to nominated rotbb for the free product category in the Ennies next year.  For the simple sake that a lot of work went into it, and a lot of great writers were a part of it.  I personally don't need any kind of accolades, and I have no intention of spamming people when the noms come out with "hey vote for me" (other than one time).

When sending out the pdf copy, I just dloaded one from drivethru and I got the typical "hey thanks for the purchase" message.  I realized that I've made an oversight.  Here's the message:

Please note: A POD version of this will be released soon.  It will be at cost.  As well a black & white printer friendly no art pdf will also be released.  We appreciate any feedback, reviews and errata information that you can provide.  Thank you very much!

Well the POD version has been released, and it's on amazon (as I couldn't figure out how to get a pod to work properly with OBS, a thing that I'm finally starting to figure out on another project).

NO the thing that I totally forgot about was my intention to make a BW Printer friendly copy of the book.   I apologize, I have not done this.  And honestly I don't know if I will.  The baron took a lot out of me this time, more so than the first.   Maybe I'll revisit this idea down the road.  In the mean time I should change that message (along with a few other of my drivethru thanks messages).

You can get the pdf of rotbb here.

and the pod here.

The other thing that I wanted to mention about the Ennies is that they ask you to forward a mp3 in case you win (apparently it gets played when you walk up).

I decided on a solo acoustic version of "The entertainer" written by Scott Joplin and performed by a dear friend Jim Flett, who passed away this year.  I felt like it was appropriate, and that it sticks with the baron's schtick.

Posted by shanepatrickward at 1:34 PM No comments: