I've been thinking a lot about tone when running games. I find that most of the games I run, or have played in have been very "chuckle fuck".  Meaning lots of giggles and not that serious. While the overall tone maybe dark, there's still a lot of room for enjoyment.

Obviously it depends on the group and gm, but I believe that pretty much any module can be run in any fashion. I've run keep on the borderlands very silly and very dark. Adventures from lotfp could be run non dark and gritty, you could even turn it high fantasy if you want. Long story short, don't worry too much about written tone, play it the way you want.

In other randomness, I've been thinking about running an open ended game using the judges guild ready ref tables and the 1e dmg tables. No map or plot, just start the players off having escaped a possible slave, and go from there. The idea that the gm won't know what's next really appeals to me. One version of DnD that I haven't really tried is first edition advanced, so I may give osric a go.

Yesterday I added a few new blogs to the blog roll.

If you didn't know, grognardia has started posting again! Which is exciting. I've been reading everyday.

Posted by shanepatrickward at 6:43 AM No comments:

It's funny how as soon as you play a game, you get the bug to write more game stuff. 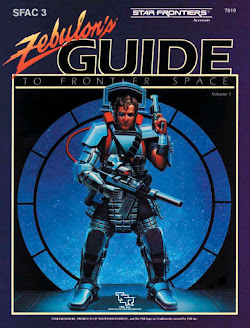 Super fun game last night.  Got together with Jeff and a few cohorts from the One Shot Group on facebook to play some Star Frontiers (Which I've never played).  Jeff was using the Zeb's Guide version, which has the oddball faserip style charts in them.  (See below) 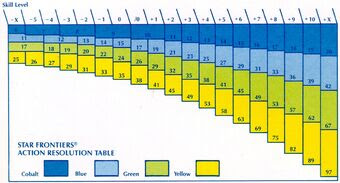 Jeff was borrowing stuff from Zeubulon's guide as well as the Knights Hawks and a lot of dragon magazine articles.  The whole premise of the game is super neat, basically post apoc earth, everyone lives under water.  The world is managed by corporations rather than governments.  Not exactly waterworld or shadowrun, but there's waves of that which is cool.   This is my first d10 style game that I'm playing in, and my first non D&D game that I've played in a long time.  We went thru basic character creation last night, and got the intro to the world and backstory.  Afterwards it was starting to get "early" for one guy (whose in England), so we pulled the plug at that point.  What I really enjoy about playing in hangouts games is that 9/10 we tend to all chat about games afterwards.  I spent about an hour and a half talking about OSR games, was labelled a Grognard (which is awesome!).  A few of the players are only just recently getting into OSR (hence the grognard thing), so we discussed some of the history, G+, etc.
One thing that I did come to the realization of was that I really just like playing games on hangouts (or zoom I guess if I have to), whilst I don't mind roll20 it often becomes very boardgamey.  I tend to spend more time farting around in roll20 and creating maps than I do prepping a game.   I just find the whole player agency thing to be really wound up tight when you are playing only theatre of the mind (and playing a system that doesn't bog you down with +/-s and other nonsense).
One of the guys I was talking to last night wants to get into writing more, so we talked about that and the 5 room dungeon model (Which he hadn't heard about).
Coming away from this discussion and the beginnings of a game I've got a WHOLE wack of inspiration and a few good ideas to start working on.  It's funny how as soon as you play a game, you get the bug to write more game stuff.
I'd like to jump back into the Gygax 75 challenge, but with a few tweaks to the process, more 5 room dungeons, less one big close by dungeon.  I think enough time has passed that I have a few more concrete ideas to put down.  I was discussing my thoughts on character creation last night, and how I'd like to have everyone get one magical talent, likely from a d20 list.  The suggestion was made that I do the table DCC/Lotfp style, where at a starting level you roll a d20 and as you level up your roll on the same table but it's a d100.  Fucking genius! This is the real trick with writing for me, is bouncing ideas off of people! It gets the juices flowing.
*damn it! I started the challenge in frigging April! It's august! What the heck shane!

Posted by shanepatrickward at 6:24 AM No comments:

Posted by shanepatrickward at 2:34 PM 2 comments:

Adding a few basic adventures to the Isle Of Dread

As we all know, Isle Of Dread is an awesome sandbox filled with a lot of adventure options.  If you need a few more options for the campaign, or even a U-turn, here's a few extra ideas using some basic era adventures.  Alternatively you may have a whole new crop of Characters (after the demise of the last bunch) and you might want to keep them on the island, but with a different scenario.
I know that a few people have replaced the major city on the isle with the dwellers of the forbidden city.  Which is a perfectly logical and evil thing to do.  I do like the idea of placing the city down south between some of the villages.  In the intro to dwellers, a Chieftain finds the PCs and tells them that trade has been hijacked by the denizens of the mysterious city.  I like this because you can play off all of the villages.  The PCs start in the main village of Tanora, they find out about some of the other villages and the trade issues.  Maybe they've been expecting a shipment and the PCs catch wind of it and investigate.
The Lost City.  It easy for the PCs to get lost and run out of food on the isle.  The Pyramid doesn't have to be the typical Egyptian styled one, in the middle of the dessert.  It could be a Mayan styled one, deep in the jungle.  A fun intro could be that the PCs have wound up on shore after their boat sank, they have plodded along thru the jungle and finally stumbled upon the pyramid.  Eventually maybe they will leave the pyramid and explore the Isle.
In Search Of The Unknown is a great dungeon that you can pretty much pop into any campaign.  Having it reasonably close to the village of Tanora means that the PCs can investigate and make their way back to town often.
Keep On The Borderlands is another great adventure that you can pop into any campaign.  My twist is a bit different however.  One version is that the keep was built long ago and its location was lost in time.  The keep is now overrun with Orcs, Goblins etc.  Hiding in the caves nearby are Cavemen who have no memory of the keep.  Alternatively the keep can be a forgotten outpost from the mainland, it manages to keep its head above water (jeez that was all kinds of puns there....) by trading with local pirates and some of the villagers.  Cue usual kotb activities and the caves of chaos.
Horror on the hill is meant to be a self contained location north of a river, it could easily be popped onto the small island north of the isle of dread.  To the east is a smaller island where you can put the town from the original adventure.   Once again, this is a good spot for the PCs to wash up on shore, or possibly float by in a raft as they discover the rest of the isle of dread.
Another one that comes to mind is "rage of the rakasta"., which changes the way the Rakasta are in Isle of dread, but could setup some interesting stuff.  A lot of the adventures from Thunderrift could be ported over to the isle.
In September I'll be running the Isle weekly.  I'll be using Swords & Wizardry FMAG for rules.  Should be lots of fun!
*This will be the second time that I've ran the Isle.  I'm looking forward to it.  Some of the above ideas may make their way into the adventure.  Or may not. 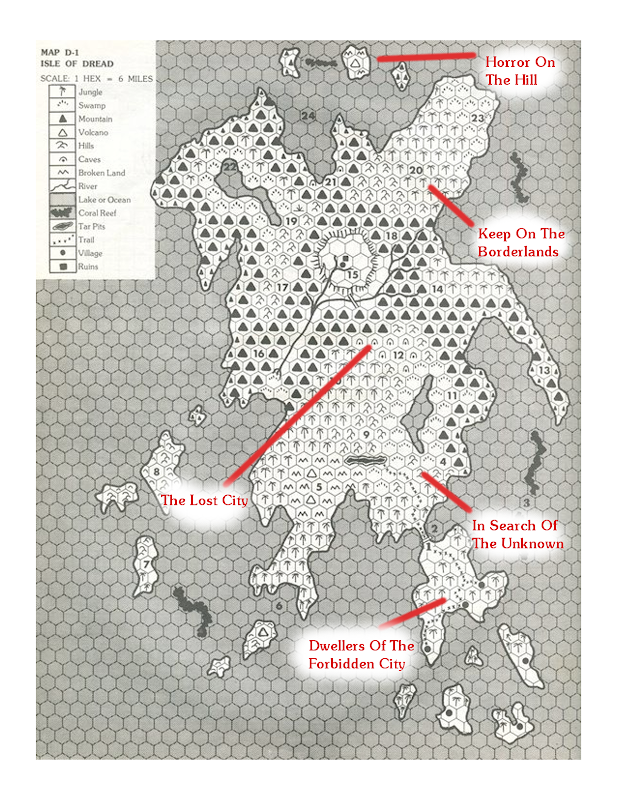 Posted by shanepatrickward at 7:46 PM No comments: