A month or so back I thought I'd hit 1000 posts on 3 Toadstools.  I made a mistake, as I was looking at my drafts and my posts.  This one is the actual 1000th.  Which seriously amazes me.

It appears there is a 2nd edition, 2nd printing of Sword & Spell.  There are three books, and the first one is free. 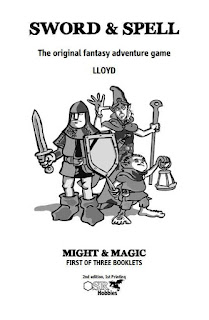 Sword & Spell is a replication of the timeless Original Edition fantasy adventure game published in 1974, with incorporation of material from its wargame predecessor.


Simplify your gaming experience and return to the days when referees rued the day when player skill and wit overcame their every challenge. Play one of six different character-types to delve dungeons, fight dragons, and with some skill and luck, return victorious with riches and magic items.

There are three separate pdfs.

This 141-page book provides a collection of B&W monster illustrations with space for you to fill in your own stats and details for your favorite "Old School" system and create your own Monster Manual.

Not free, but not expensive.  Get it here.

10 pages of odd situations for a total of 200 items
Split into 10 emblematic locations (forest, temple, sanatorium, city, ruins, ...)
Most are not combat oriented, but who knows ...
These odd situations are perfect to entertain your players during long travels or exploration without throwing at them only random combat encounters.

They also can be useful to make your world feel alive with events or characters unrelated to player characters or their quest !

Not free but not expensive, get it here.

This isn't really OSR, but looks cool.  Just reading the preview, it looked right up my alley.  Plus the art is pretty bad ass.  Apparently this was a kickstarter that took awhile to complete.

THIS DEFIANT EARTH is a rules-lite roleplaying game set in a universe inspired by the popular imagination of the 1950s: an Atomic Age dreamscape as envisioned by television, cheap paperback novels, comic books, and above all, movies. In this world, the American Dream is alive and well, but threatened by monsters from the deep recesses of the Earth, alien flying saucers, and sinister foreign agents pledged to destabilize the American way of life with super-advanced technology. Players take on the roles of America’s noble defenders in these thrilling but dangerous times! It’s up to you to stop the horde of gargantuan ants before they establish a colony in the heart of New York City. It’s up to you to thwart the sinister plans of Kro-Gar, the conqueror from space. You will test-pilot rockets, fight monsters, challenge unknown landscapes, and make the world safe for freedom and democracy. You will stand a champion of THIS DEFIANT EARTH!

This players' guide version of the game includes all you need to get started playing the game, including ready-to-use monsters!


THIS DEFIANT EARTH is based on the same Lucky 6 System driving the Urban Knights and Fear Response games (also available from DriveThruRPG). A number of 6-sided dice are required for play.

You can get it here.


Posted by shanepatrickward at 6:29 AM