A long time ago I ran a brief Mutant future campaign for some friends.   I had done a PILE of prep with locations factions etc, my intention at some point was to release it.  At the time I think everything that I wrote I was "going to release", which was a silly thought.  I decided I'm going to release it here, over the course of a few blogposts.  Hopefully I can get a bit more indepth into the world I created.  Here's the start of it.

The adventures take place in the frozen wastes of Manitoba.  I had condensed a map to add in a few towns that we have been to in IRL and the city I'm in.  The starting point village was the town of Gimli (which has a lot of Viking roots).  There is a statue of an Icelandic adventurer in the town.  I ended up modelling the starting village inhabitants around Icelandic culture, the God's they believed in, etc.  I decided that the ancients had passed down books from Libraries with the information that they started to incorporate.

Gimli is notable for its Icelandic culture and celebrates this locally unique heritage throughout the year and the community of Gimli.[23] A popular sight in the town is the pier which extends from the downtown shoreline out onto Lake Winnipeg and features the Gimli Seawall Gallery, a cement wall 977 feet (298 m) long featuring 72 murals which depict the history and stories of the community.[24]

The town was basically surrounded by a half ring dike of old cars (similar to new vegas), the rest of the town was protected by the north shore of frozen Lake Winnipeg. 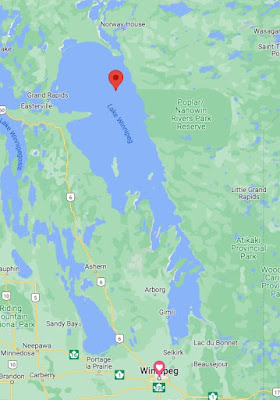 I had made the decision that the inhabitants of Gimli were a bit further advanced than what Gamma World suggests (basically tribesmen).  They had access to solar power, and had an underground farming community.  One of the biggest needs from the village was obtaining more solar panels and maintaining the current infrastructure.  Trade was in goods scavenged, water, food and other necessities.
Faction wise, there was the "brotherhood of steel" basically, the RCMP.  Or at least skewed facsimile of the RCMP.  These were the peace keepers and protectors of the lands.  They were also obsessed with technology and hoarded it (Like the brotherhood).  Most of the RCMP were mutated animals, being led by a Polar Bear (Because Canada).
Close by was also the "Collector", who is an exact duplicate of the Collector from Guardians of the galaxy.  Another person obsessed with tech, and wonders of the ancient world.  He pays big caps for items.   The collector's base was an old military installation that had been retrofitted.  Upon a hill surrounded by fences, security droids, machine gun installs, etc.  An elevator would get you down into the lower levels.  The only way to get in was by invitation.  The PCs were tasked with smuggling tech out of Gimli to the collector.  Of course the town is guarded by the watchful eye of the RCMP.
The children of the atom (another rip off! well hey it's my game so whatever).  These people are actually pure breeds that live underground away from the harsh elements.  Their entire culture is based around be completely slammed.   In their community they grow mushrooms and other mind bending drugs and waste their time pondering philosophy and the cosmos.
Pure Alliance; direct from the Mutant Future book, these people are obsessed with capturing pure breed humans and experimenting on them.
Slavers:  Slavers hunt the world looking for all manner of humans and the like to work in mines, be shipped off to fighting pits.  They have an uneasy alliance with the Pures and sell off any pure breds they find.
The Big Bang!
I hadn't quite decided on the year, but it wasn't in the far distant future.  Maybe 2050 everything went for shit.  What happened was that the Cern super collider had an accident, a catastrophic failure.  Preceding the utter destruction of the collider sent the world into chaos, warning systems for nuclear weapons went on the fritz and launched because of the huge earthquake that happened.  The world was turned upside down.  Manitoba was hit with Soviet and American nukes, one of the largest bases is just south of Manitoba in North Dakota.  Winnipeg the largest city in Manitoba is a complete wasteland.   In Winnipeg is a disease control laboratory (true).  During the events, the lab was destroyed and diseases went amuk, creating Zombies and other unnatural combinations.  What is left of the city is a nightmare.
The adventure started off with the PCs being tied to a cart by the Slavers.  The RCMP fight off the slavers and release the PCs.  They send them off in the direction of Gimli.  In the cart is a large container with weapons and armour (a nice little random table with starting equipment).
Location wise:
Not far from Gimli in real life is an army base, A abandoned hydro electric dam with Morlocks, An old mine in a small town, Further away is a bigger army base filled with all kinds of nasty mutated things, A crashed airplane filled with Convicts from the south (likely being dropped off in the wastes of Canada).
This was the basics.  A lot of it was very fallout inspired as that is one of my only real references for post apoc.