Of leaving the world unwritten.  Just the bare bones framework.  (this is a continuation of previous discussion on mystara), let's take a trip back.... in time....

I wasn't born exactly around the time I am speaking of, I was born into the 2nd edition of Forgotten Realms, it had evolved, but not as much as it has now.

I am however speaking of Mystara.  What I'm thinking about is the day you got "Isle Of Dread", and that is your only resource to create adventures from.  The small map you got with the names on it, and the little paragraph descriptions.  Where do you go from there?

Here's where I'm going to go.

I'm going to take that map, the map and contents of Thunderrift, and the Norse pantheon and go from there.

I am going to fully pretend like nothing else has been written for the setting.  As far as my players are concerned, it all begins and ends with the map and the little write ups.

Eventually I might get into Hollow world, or some of the other adventures that were written around that time.  But in all honesty there's enough political silliness going on to keep it going.

As I was saying to +Andy Bartlett all I need is some world ending chaotic crazy person to show up and I can figure out a way to make this work.   As well, didn't they put Loki's hit points in deity's and demigods? 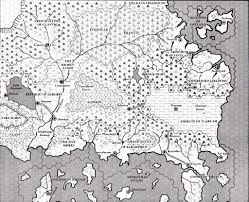 In a sense this is a self imposed campaign.  I'm taking something and building on it, but not really nodding my head towards things that are accepted as part of the the normal campaign.  For example, KOTB might make an appearance.  I have an old dragon lance adventure that might make an appearance.  I also have to re try out the Over Run Mines somewhere.  Side note, I already plan to have the Lost City on the Isle Of Dread.  (yup I choked on my beer as well, its going to be entertaining!).

Posted by shanepatrickward at 8:49 PM