I honestly have no idea exactly where that reference comes from, but it was said during the session.  Sometime near the beginning and probably by our fighter who is comedic.  The facebook invite I received for this session was titled "for the love of god, why did I give you a walking house!".  And we made full use of that thing, we went from one end of Barovia to another.

At the end of last session we were at the Winery, so we decided to have a discussion with the Martikovs about what was up the order of the silver dragon (which we had previously heard about thru a rumour).  We got some vague information and were pointed in the direction of arganvasthold (or however you spell it).... barovians!

TO THE WALKING HOUSE!

We get to arganmcdonalds and find a mansion that looks quite unused, with a untended front yard.  The gist of which is this place looks like no one has been here in a long time.  (cut the damn grass you bunch of lazy liches)

We wander thru the mansion, nothing, notta, nope.  Well other than spider webs.

We stumbled into this room, and find this old dead guy (which is what I'm calling him from now on).  He tells us this big spiel about Strahd, and the order of the silver dragoon, etc.  Old dead guy wants to help us take out strahd!  but he wants Strahd to suffer (and possibly not die). 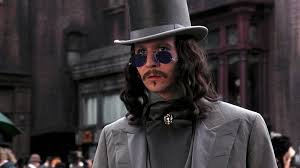 My character keln (who i've grown to despise and he's basically an idiot with a holy mammoth turd)  asks old dead guy about strahds "love loves".  Keln is sure that there's a missing girl out there, that centuries ago was the soul of one of strahd's girlfriends. Keln has access to a VCR and has watched Bram Strokers Dracula few times, he's got this.

Anyways old dead guy wants us to lit a becon for him.  Problem is the only way to lit the becon is to get the skull of arkanvideoseller from the crypt in guess where?

if you guessed anything but Strahds crib, I'm shaking my head at you.

K so back to the walking house!

Keln has another brain wave (as his handler has had a few beers).  "we should go to the town that has those festivals, tell them we can create a NEW festival, the festival of the walking house!!!" And in the mean time see if we can scrounge up some red shirts for meat shields, as we are off to see strahd.

We find the mayor at his place and he's all like "nope can't spare anyone".

The CHARMED Mayor decides to give us a pile of magical loot! (1 point Gnome 0 points mayor).

After a brief drink at the tavern.  (those people are ecstatic that the winery is back in business)  we are once again off to see Mr. Strahd.

Editors note:  The Gnome somehow now has a bag of holding and a portable hole! He's going to cause shit.

My character got this cool staff that will transport us to some other plane of existence for 240 days.  I'm mildly excited about this.

Alright, so we roll up on Strahd's crib, and Martikov "the raven" is there, and he's cheesed.  Cuz we were supposed to meet up with him like a week ago.  (it's  been a year of playing strahd fyi, poor bugger has been waiting awhile).

martikov tells us he scoped out the place, and he figured out where a few things are, including the skull we are after.  Which is a dragon skull!

thank Lolth that we got a big assed walking house right?

So the gnome flies up with brand new magic cape thingy, throws us a rope and we storm the castle!

Prior to getting up to the window, I gave dorian (the raven martikov) a piece of string, and he flew off happily to work on his nest I guess?

We wander around the castle.  At one point I got totally punked by Strahd.  I wandered into a hallway, and got a "blast this and that".  Turns out it was a wooden statue on a rope.

we somehow managed to find out that, we not only have to kill the physical being of strahd, but also his heart that is locked away somewhere (that figures doesn't it).

Honestly someone is going to die.  this isn't the end

And along comes basically Igor.  Who is expecting us.  (damn ravens)

he is going to get our rooms ready.

While he buggers off, we are all just hanging out in the mess hall, and we notice the big assed dragon skull.

So we get a bit "stealy" and try and get it down, with some terrible abillities checks.  Finally we get it in the portable hole.

then what do you know? That damned werewolf (that we didn't kill) shows up out of the blue.  So we beat him up.  He runs at my wifes character, (I'm down the line as far as init is concerned).  I cast hold person and our fighter boots him into the portable hole.

And then Igor shows up.


Editors note:  Our DM is fucking awesome, his timing is amazing!

I made some smoked jalapenos and sausages on the smoker, and my wife made some killer macaroni salad.  And we played D&D on the deck in the sunshine.


Posted by shanepatrickward at 12:44 AM