It's all my fault

Well not entirely, it's also +Dyson Logos fault as well.

Dyson was wondering if there were any groups on facebook that were all "FUCK YAH DIY D&D", similar to some of the great groups on Google plus (That seem to be a lot quieter than they used to be).

This facebook thread yielded a lot of comments, 74 to be exact.

One of those comments was this arse Irishmen that said

That arse Irishmen was me.

So we managed to come up with the tavern owner thing super quick.

And Dyson created a bad assed pdf.
Here's the download 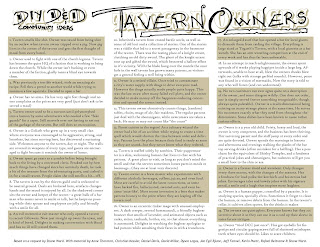 So then Dyson created this community for all us like minded individuals that want to just create stuff and go "FUCK YAH!"

Now we have almost completed a d100 creepy room descriptions, someone has already made a bad assed cover for it.

We are about 154 items into "things found in chests".

And its coming every day, a new thread that gets cooking, by the end of the day there's a pile of it done, or completed.

and sooooo much fun!


What this group is:
This is a group for getting together and creating RPG stuff. It is an incubator for RPG material - and by that I mean stories, rules, random tables, seeds, those things that launch us into avenues new and old with renewed creativity and awesomeness. We are specifically aimed at creating shared and shareable RPG resources. We are a community that creates together and springboards ideas off each other.
What this group isn't:
This isn't a place to promote commercial materials. This isn't a place to argue about designs (you can say "here's how I would do that...." but be constructive and CREATE). This isn't a place for making RPG terrain and props (because those are personal, not shared resources).
Rules:
1. Don't be a jerk.
2. No blatant self-promotion.
3. This is for DIY RPG stuff - your own or others. The "Do it Yourself" ethos is key here - the heartblood of the DIY RPG scene is zines, one-page mini-products, and funky things thrown together because you thought it would be awesome and that will be even more awesome if more people can use it to springboard their creativity.
4. While the vast majority of DIY RPG stuff is generally DIY D&D material, it doesn't mean we are a D&D only group. DIY Traveller, DIY WoD, you name it. Make something cool and odd-ball, or come up with an idea for something cool, and throw it at the wall and see if it sticks!
5. For DIY terrain and cool props, check out DM Scotty's group. Generally we are aiming for rules and art related awesomeness here, not wicked dungeon-crafts.
6. Don't post anything that isn't directly involved in some DIY awesomeness, and remember rules 1 & 2 again.
Posted by shanepatrickward at 3:06 PM