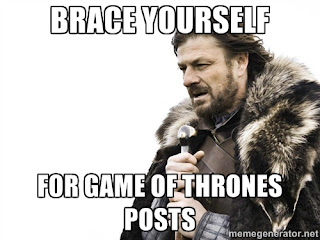 Yes, it's taken me this long to finally start reading Game Of Thrones.  I'm about three quarters of the way thru the first book.  I just finished the part where Ser Gregor may have in fact raided the country side, slaughtering peasants while not wearing any banners.  Basically posing as a random brigand.  Of course the remaining peasants have went to talk to the king, (or in this case the hand of the king, who coincidentally looks a lot like the guy on the left!).  I started thing, DAMN this is an adventure waiting to happen isn't it?

Let's say we are running Keep On The Borderlands, and there is currently an uneasy true between the Lord of the keep (cultist) and another province to the south of the keep.  What a wonderful way to start out an all out war!  The southern lord sends riders out to raid the countryside, the same thing happens, the peasants come to the lord and state what happened.  The lord of course looks to the PC"s to find out what exactly happened.  Here's where you can throw the twist in.  Maybe the southern lord has a spy within the keep and he knows the going's on of the cultists. He feels now is the time to make a move on the keep.  But in order to do it he must cast suspicion elsewhere.

This also brings me to another pondering.  Try as I might, I have not found a retro clone copy of Birthright.  From what I gather it was quite cool, but wasn't around for very long.  I tend to wonder why that was?  I remember seeing ad's for it, and thought "hey this looks kinda cool!".  Unfortunately I've never read it.  To find a copy of it nowadays is extremely expensive!  (check this ebay ad).  I did however just find out that it is in fact on drivethrurpg. 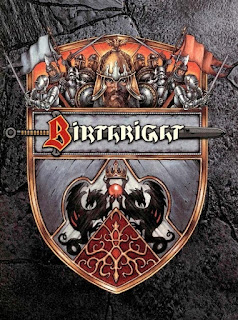 Product Description:
A king stands in the hight turret of his castle, squinting at the distant hills. He can just make out the figures of his troops engaging the enemy in battle. As a damp breeze whips at his cloak, he contemplates the war. He has culled the best generals, captains, and troops from his land. His court wizard wields powers that unnerve even the most seasonal warriors. Can the forces he commands hold the enemy at bay? Or will the king awake at dawn to the pounding of battering rams and showers of deadly arrows?

I've often waxed a bit about doing a campaign with mass battles, and the more I think about it, trying to role play political intrigue could also be super cool.  Not to mention Swords & Wizardry has some nice rules for mass combat.

It's something to think about for now.


Posted by shanepatrickward at 7:00 AM