As I stated previously I started replaying skyrim.  In hopes it will be the last time.  I'm guessing probably not.  I just finished up a delve into a dwemer ruin, and was struck by the fact that the puzzle within could also be a equally cool D&D puzzle.

Here is some information on the tonal resonator puzzle in the game. http://elderscrolls.wikia.com/wiki/Tonal_Resonator

Below is a spoiler alert video on how to do it in game.

And here are my thoughts on a D&D puzzle.   Rather than use 5 different tonal resonators (which might become difficult for players) I would suggest using three.  A clue, like in the game could be left by a dead npc to the correct first position. 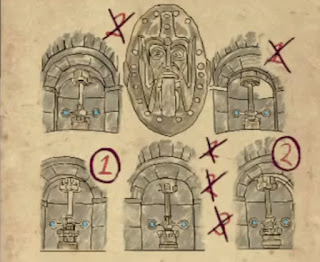 Correct Sequence:  The resonators need to be pushed in the following order.
2, 3, 1

The resonators can be labelled the following:
1.  Left
2.  Middle
3.  Right

In the case of 3 being pushed first, geysers of flames will blast the players 2d6 damage.

In the case of 1 being pushed first, a pit trap will open dropping the players down 10 feet (1d6 damage)

As an alternative, you could use face cards from a card deck and have the players attempt to put them in the correct order.

Posted by shanepatrickward at 2:25 PM