Hey everyone, couple of cool things I've noticed in the last few days.

The Masters Hoard
A System Neutral Collection of 22 Magic items
Hopefully most of the items are fairly original and are often accompanied by a quirk or two!  22 magic items in 26 pages!  Cool stuff, and it's free! (But should be pay what you want).

Blog Post:  NEW CHARACTERS DEEP IN A MEGADUNGEON
https://pfaff.blog/new-characters-deep-in-a-megadungeon/
Genius way of getting new characters into the dungeon.  I'll be printing this one off.

3 Toadstools stuff:
Apparently I have a bit of a perfectionist issue.  But don't fret! The pdf version of rotbb should be up on drivethru by the end of the week.  I've sent out a copy to all the authors for final approval and I have a few little details I need to fix up.  Shouldn't take me too long to do.  Also a few nitpicky things on my part.  I've realized that I'm good at details, I have a list that I need to run thru quickly and then it's ready to go.  Just latetly I was working on a CD production, and my client changed the lineup on the graphics, but didn't tell me.  I had to reburn the CD masters.  It's things like this that I catch (for better or worse hahah).  Hence why this is taking so damn long.  Another thing I realized is that I'm going to have to copy and paste text out of publisher directly into word for the "printer friendly BW version" of rotbb, due to the changes I'm working on.  Because the publisher file has become the "master"... k I'm rambling.

The intention is to put up the pdf and then if there's any little erratta bits I'll fix em.  After that I want to figure out a way to make it a POD, at cost.  The intention behind the baron has always been to A.  Have fun B.  Promote other authors & artists.  Hence "at cost".  A few people have wanted me to make a bit of money at it, but I honestly don't want to.  Part of the charm of working on this, is seriously bouncing things off of people, asking for a favour here and there, and having fun.  Example I talked to James West a few weeks back, I asked him if he would be up for drawing a cartoon for the book.  The idea was to have a 1e DMG joke in it.  James had a few other things going on at the time when we started writing, so he wasn't able to jump on board.  However he was able to draw an awesome cartoon!  Check out his profile to see a picture of it

Here's a thing I'm considering for the final layout for POD.  Let me know if you think it's silly or not.  The general idea is if your flipping thru the book you would be able to quickly see a room number. 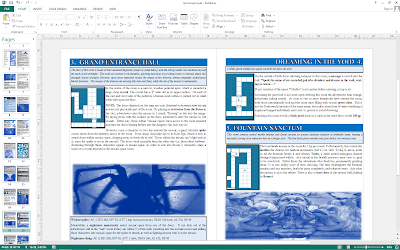 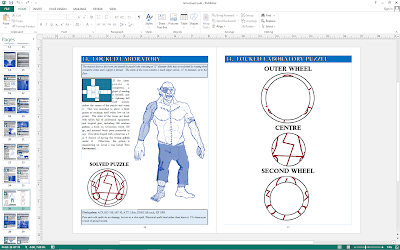 Posted by shanepatrickward at 7:03 AM