This post contains spoilers about the Netflix show "Dark". 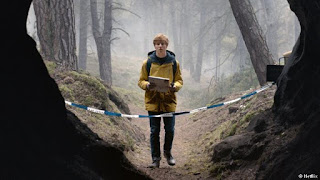 After we finished watching the show the other day (I can't wait for the next season!) I started thinking about running a time travel type D&D game.  As I'm not the best historian in the world, I was trying to wrap my brain around doing a game with 3 different time lines (like the show), set in a medieval world.  However I wanted to have guns in it, and I couldn't quite figure out how to do a future world. Part of it was "what technology is in the past thirty years, and or the future?"  Obviously I could have it set on the brink of gunpowder.  But what happens in the future?

In the TV show there are 3 time periods, 1953, 1986 and 2019.  Obviously there are changes in the way the world is between the time periods.  Certain things are constant however, like cars, phones, roads etc.  I realized quite quickly last night that doing a time travel game similar to the show would work extremely well with Dark Places Demogorgons!  Rather than try and pull off some kinda of typical D&D fantasy game.  The neat thing about trying something like this is you can have relatives in the time periods of the characters.

So using the dark mold I could easily start the thing in 1986 (because DP&D is set in the 80s!) and then time travel to now which is easy, and I love the 50's so that would be easy to write that as well.  I would think that have a central location like a Diner or a Bar would be handy.  Maybe the jukebox in the bar is bright shiney new in the 50s and barely useable in the 2020's with scratched records.

The other thought I had was running a "Call of Cthulhu" game with this, however I'm not that well versed in the rules of the game, and I'm not really a horror guy.

Anyways, just some thoughts.  I think it could be interesting.

If you get a chance watch the show if you haven't already! It's wonderful.

I briefly discussed this idea on my podcast last night.

Email ThisBlogThis!Share to TwitterShare to FacebookShare to Pinterest
Labels: dark, DARK PLACES & DEMOGORGONS, one off idea