Hey everyone! I've been very busy with work!  Which is good, as I've been enjoying it so very much. Unfortunately I haven't really been able to blog much.  My day off is Wednesdays, and for the last few weeks I've honestly been a fog trying to figure out what to do.  Finally decided I"ll try my hand at running an afternoon game on roll20.  I originally I thought about running a few of the Thunderrift modules.  However the first one I picked wasn't quite up to snuff, writing wise (no offence), it just felt like it needed a bit of a rewrite and was way too much prep for me.

I decided to make a change, and run an adventure in Mystara.  Specifically "the eye of traladar", which is super cool (albeit railroadey).  This morning I"m doing a re-read and getting a few things prepped.  As is typical I over prep.  We are going to play for about 2 hours, and I'm sure I have more than enough game to run for that. 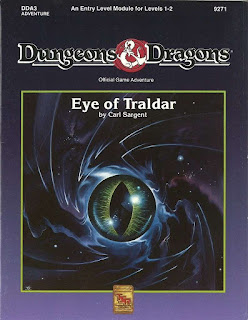 In other news I received a nice package with a TON of AD&D stuff.  I've got so much gaming material now!  I haven't quite decided if I'm going to create a homebrew world or just start incorporating all these cool bits and pieces.  I suppose time will tell.  In the meantime I'm going to delve deeply into Mystara.  It's funny how when you read a little thing and your like "wow okay, that is a great backstory for this, or that".  It gets the wheels turning!

Another fun fact, yesterday was Moldvay's birthday, and I think its appropriate that I'm running his rules today!  I was originally going to run 2e on roll20, but got very annoyed with the 2 character sheet options provided.  Neither was basic enough, and there was bits and pieces of skills & powers included in the sheets (of which I'm not going to run).  Long story short I realized that running b/x is the easiest thing for roll20.  The sheets are great, I have some backstories setup.  As well the sheets do all the math for rolls for yah, so it makes it easy for players who don't quite get "roll under" and descending armour class.  I even setup a basic monster sheet for myself that will allow me not to have to worry about the math (although its pretty easy).

Anyways, this is going to be fun!  Thankfully I have some ice in the fridge for the scotch I'm going to pour myself.