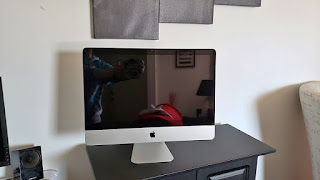 I finally got a new to me Mac last night.  Inquiring minds its a Apple iMac 21.5" Intel i5 2.5GHz Quad Core, 8GB Ram.  I've been wanting some kinda Mac for years, especially after spending so much time in the recording studio with them.  Whilst all computers are great nowadays, I must admit that playing with this thing inspires creativity, and that is great! Hopefully everything works out, I tend to take a REALLY long time deciding on anything, and more often than not just delay any kinda of purchase.  Part of the reason is that certain things I've bought over the years haven't worked out that well.

Anyways, on the docket of shit I'm gonna get done:


Posted by shanepatrickward at 7:17 AM