Just finished up the session and boy was it fun!  The PCs left off at the edge of the city ruins.  In the morning they got up and ventured in.  The city is all stone buildings, lots of rubble.  Some vegetation creeps up here and there becoming overgrown in spots.

They decide to head towards the bridge.

They are smart enough to sneak around the city (they are halflings) along the edges of buildings, staying in the shadows as much as possible.  They hear a moaning sound coming from a little ways away.

The wizard hafling roscoe sends his wolf/sheep to investigate the moaning sounds.  They quickly stumbled upon a well and find a trapped human way down at the bottom.

The realize quickly that they don't have a rope.  She however does and throws it up to them.  A few dex checks later a halfling grabs on to it.  This is where a question of weight ratios comes into play.  A very light halfling is at the top of a well holding onto a rope with a reasonably heavy human at the bottom of a well!  Thankfully with a combined strength check they managed to get the cleric up to the top of the well.

Her name is Walda, and she has been sent into the ruins to banish a great evil.  She dreams of a giant floating eye with huge teeth and tentacles.  This is what her god wants to destroy.

They set off with the cleric in tow.

They stumbled upon a building that is in decent shape and decide to search it.  They find a room full of skeletons.  A fight breaks out and the PCs managed to get the upper hand very quickly.  Mostly due to acid spray on the part of the wizard.

Searching the room they find a weird metallic object in the form of an L.  It turns out to be a blaster gun.  Wildly futuristic.

The world is a fantasy world based upon a civilization that had an apocalypse.  That race was the an advanced version of Elves, very technological.

They also find a hackcard for a computer.

They head off towards the bridge, see a sign that is crudely painted that says "pay the toll or die".  Sneak around a bit, and notice a gurad on their side of the bridge sleeping.  As they are sneaking they make a bit too much noise and the bandits on the other side of the river start firing a trebuchet at them.

They manage to kill the guard on their side, who has stumbled awake, drunk and searching for his sword.

Sprinting across the bridge they nimbly get thru stones that are falling from the actual bridge, and rocks being shot at them from the trebuchet.  The wizard catches the trebuchet on fire and 2 of the bandits run down to the crick (super shallow river) and attempt to put out the fire.  Yeah they are a bunch of morons!

They kill the bandits save one and interrogate him.  Eventually they get enough information from the stuttering scared for his life bandit to know exactly where the bandit hangout is.

And that is where we left off.

I drew this map today, it's longtooth.  It's a five minute map.  I believe Matt Jackson was the guy who started "friday five minute maps" on google plus.  I'm going to keep doing that.  It's something to get over the curbside pandemic boredom. 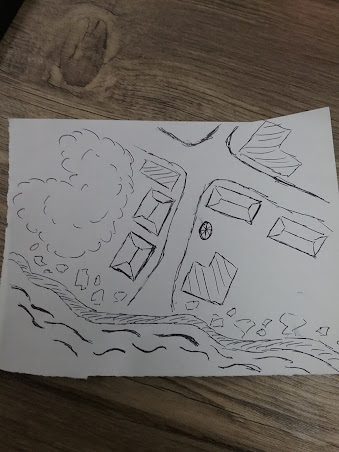 Posted by shanepatrickward at 8:36 PM