Swinging on chandeliers - Session 7 - Curse Of Strahd - Part One 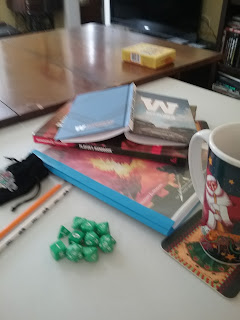 After talking with Ismark, we found out that the burgomeiester's daughter has been eyed up by Strahd himself.  We all got up and stretched in the morning, and a few of us went over to talk with her.

It turns out the burgomeiester died.  The house was covered in scars and windows were broken from wolf attacks.  The daughter said that she would come with us to Valakii after her father was buried.  We made arrangements to have the father buried.  Apparently we needed to stand guard for the whole evening.  And at one point a weirdo ghost army decided to walk thru the graveyard.  We didn't really think much of it, cuz it's ravenloft.

We set off to go to Valakii and deliver the daughter into some sort of saftey.  On the way we see the strange skeleton warrior again, but make a quick decision that:

"Fuck that we are NOT following that damn skeleton again!"
We finally get to Valkii, and come up to the palisades, 2 guards shout down to us "Who goes there?".  We do a bit of talking and manage to get ourselves into town.  The guard, is completely oblivious.  He talks to one of the characters and lets him in.  The next one of us steps up to follow and the guard goes "Who goes there?".  And repeat, so funny.

Alright, so apparently there's a festival this week in Valkii, and last week there was a festival.  We here all about it and are somewhat excited.  Since the town is quite safe, I decide to hole up in the tavern for a few days and read a book.  I'm basically out of commission for 48 hours.

"manual of bodily health", (to which my CON has now been increased to 18!).

The rest of the party decided to get epically drunk on this really famous wine.  Heard at the table:
"Someone is going to have relations with a sheep aren't they?"

Overheard at the bar, the tavern owner mentions that he hasn't had a shipment of this awesome wine for a long time, apparently the wine wizards are behind on their delivery.  Hmm.... side quest.

The gnome wants to buy this tavern as well, and has a incredibly long discussion, that prompts the thief to realize that she doesn't want her money spent on something that she doesn't agree with.  Cue interparty conflict. She also plays a sarcastic bitch (its on the character sheet).  Later in the evening once everyone is pissed drunk, she robs us.  I'm still in my room reading.

The fighter wakes up in a stable with his arms around a sheep.  The gnome was using mage hand to twirl around the chandelier for most of the evening.  It was epic! And like a nerd I stayed in my room and missed the whole thing!

We find out that the festival of the burning light is coming up in a few days, and we are all totally excited to go and check it out.  Apparently it gets rid of the bad spirits.  Some of the townsfolk think that last weeks "killing wolves" festival was supposed to do the same thing, but it appears that it hasn't.  The mayor has decided on another festival!

Posted by shanepatrickward at 7:57 AM